Why do I find myself drawn to the Shilin Night Market every time I am in Taipei?  Because there is always something new to try and something old to remember and savor again.  That’s why.

I got the Hot Star Chicken out of the way to begin, as I always do.  I am addicted to the chicken there.  There are many other stalls, but this one does it the best.  You have to bat the Chinese tourists trying to jump queue out of the way, but it is right there and the first bite you want when you get to Shilin.  No pictures because there are so many out there and on this page already.

Now, on to try new things!

First off you can fry up some miniature crabs.  I had to try right? 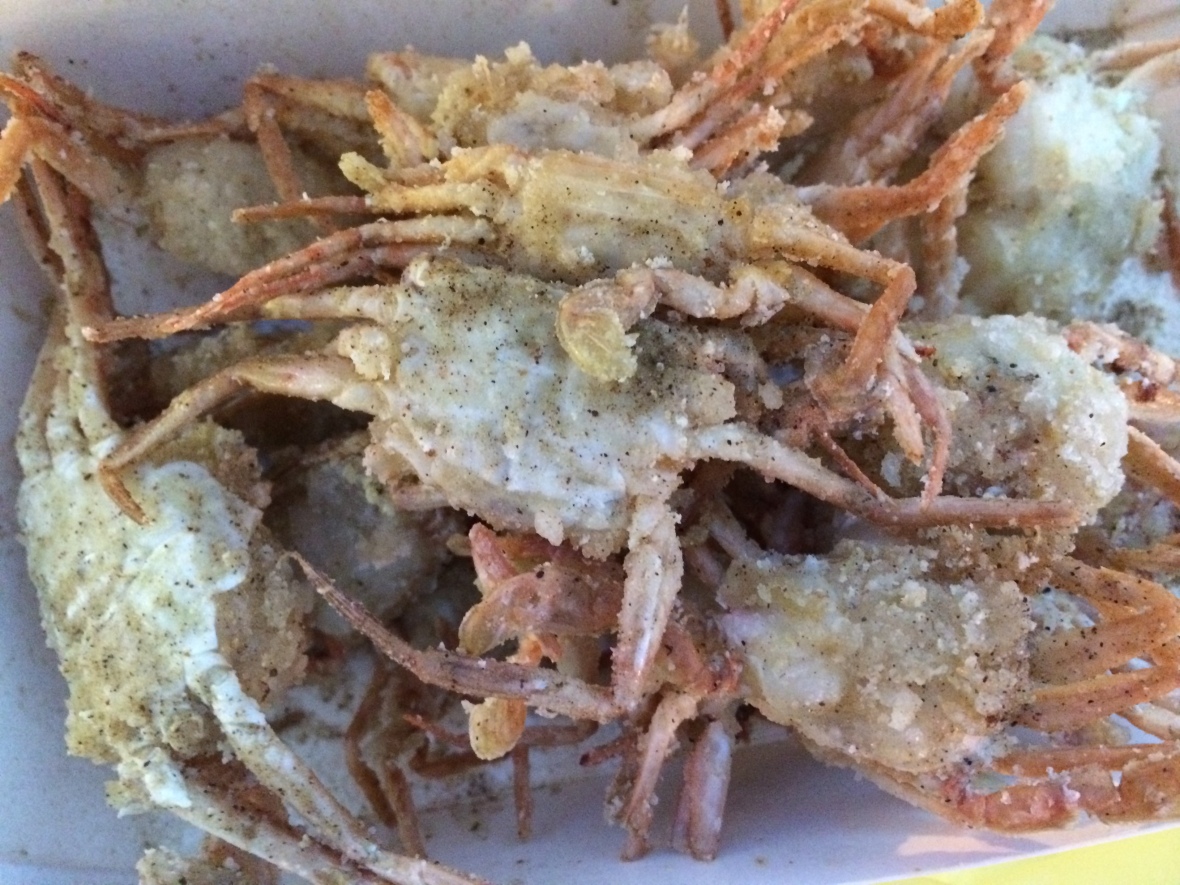 So I tried it, and I can say that it’s not my favorite.  But, worth a shot.  Not enough meat, it just tastes like fried shell to me.

The next stall I saw was one in which there was a huge queue.  So I just joined.  I figured it couldn’t be that bad.  I didn’t even know what it was at first, until I got a little closer.  All I knew is that they were grilling up something with meat and vegetables. 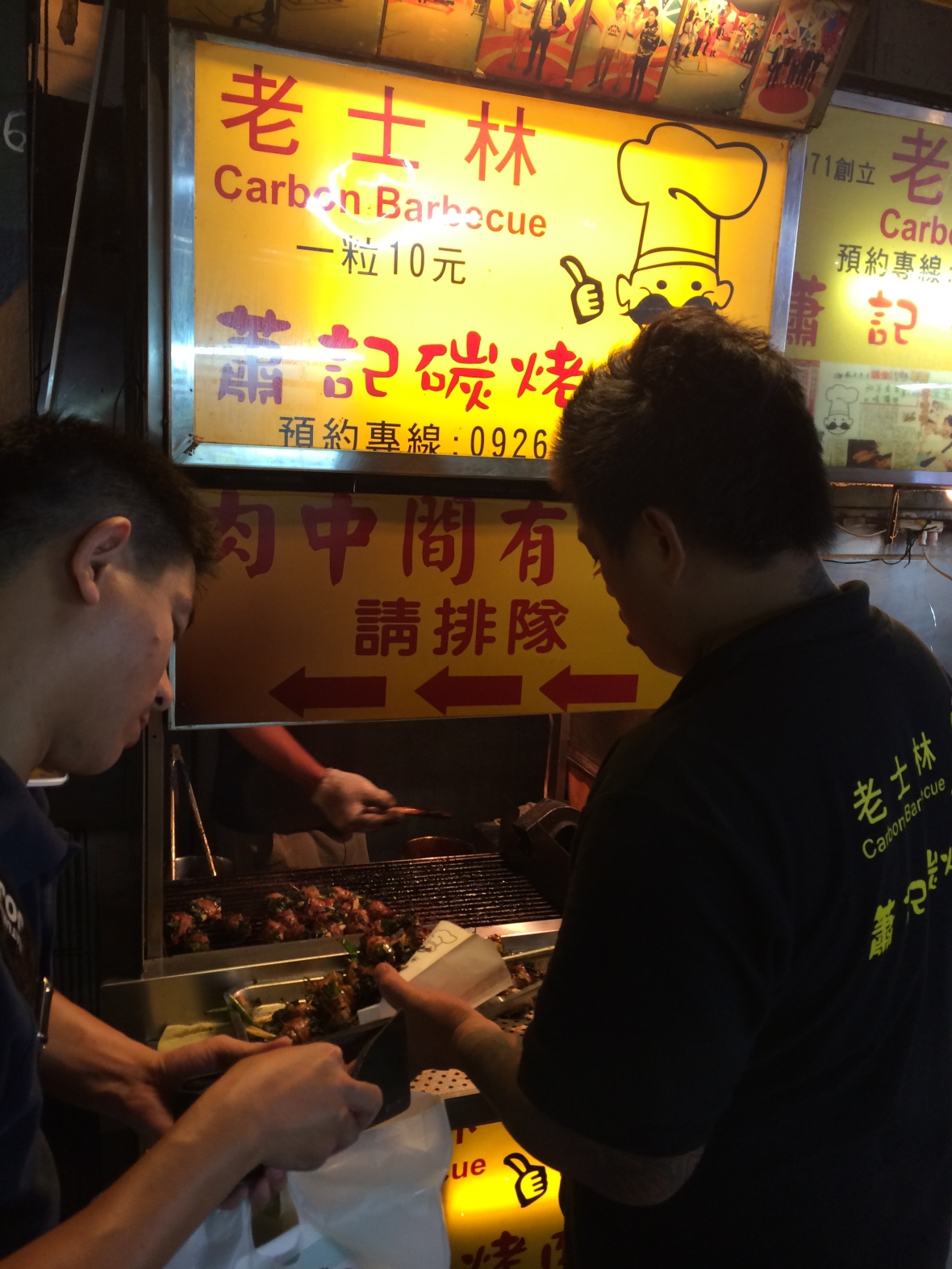 They cooked them all up and sold them in bags and bunches.  I needed to try, so I ordered three of them.

It is a piece of pork wrapped around leeks and onions and then finished off with a sweet glaze.  Not bad at all!  A little heavy on the leek and onion side, but the taste was excellent.  And the queue wasn’t bad, I got to the front in about 5 minutes. 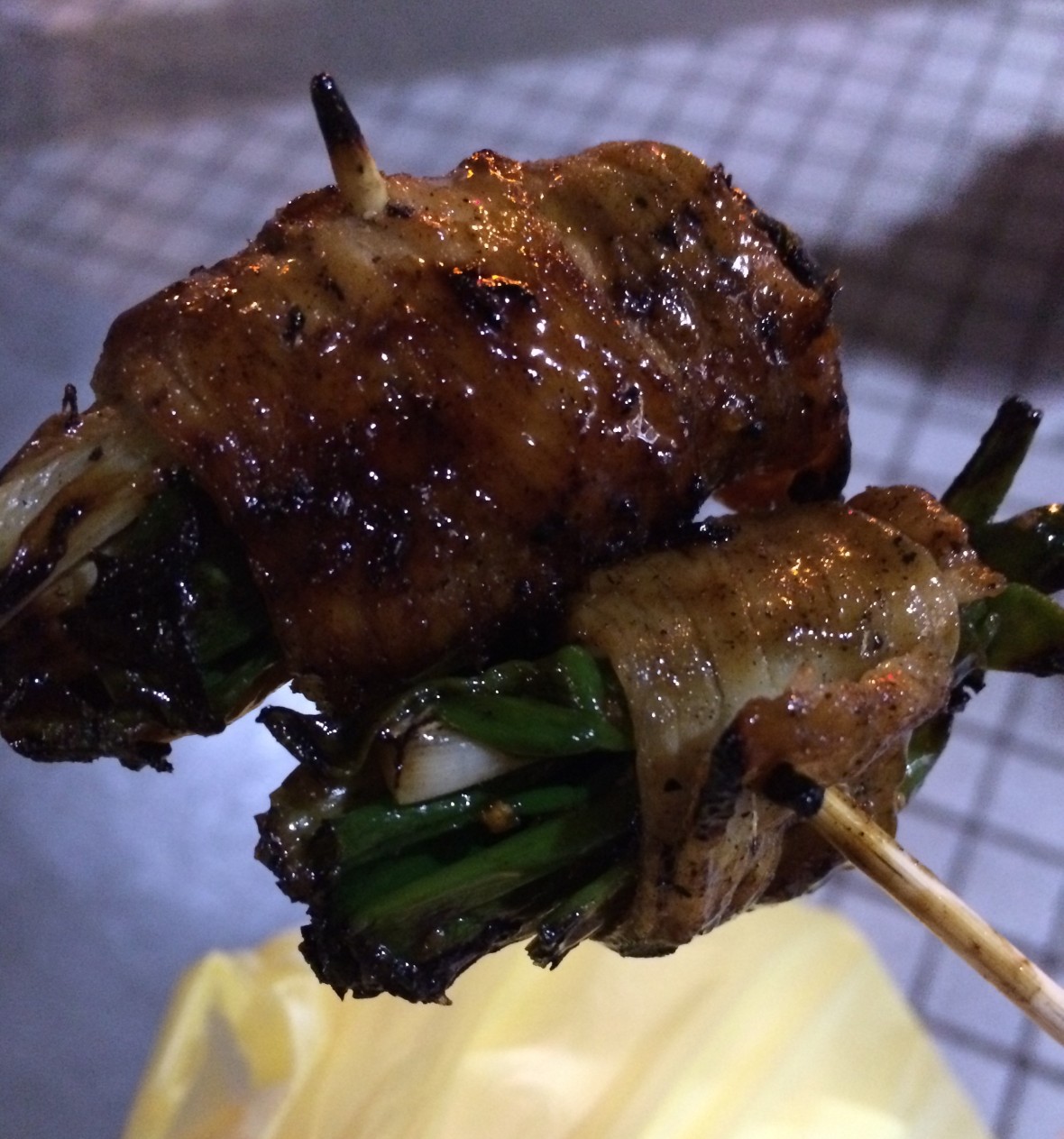 Now I love Taiwanese Sausage.  But I’ve really only had the plain grilled short ones.  I never had tried the “Big sausage wrapped in Little Sausage” (大腸包小腸), but I was game.  The hardest part?  What flavor to get!  Most people like the garlic, but I went with the Basil flavored.

It is a normal sausage on the inside, but the outside one is actually a rice sausage, giving it a strange texture.  So instead of a sausage in a bread bun, you have it in a rice “bun” or sausage in this case.

Something that I have had in Jiu Fen, but not at Shilin before.  Fried Giant Squid.  Man, do I love this.  It is so tender and the pieces are nice and flavorful.  We’re not talking small size calamari like in an Italian restaurant, this is a giant squid, cut up, battered and fried.  Yum, yum, yum!

This is the normal seaweed flavor, but you can get other sprinkled on toppings as well. 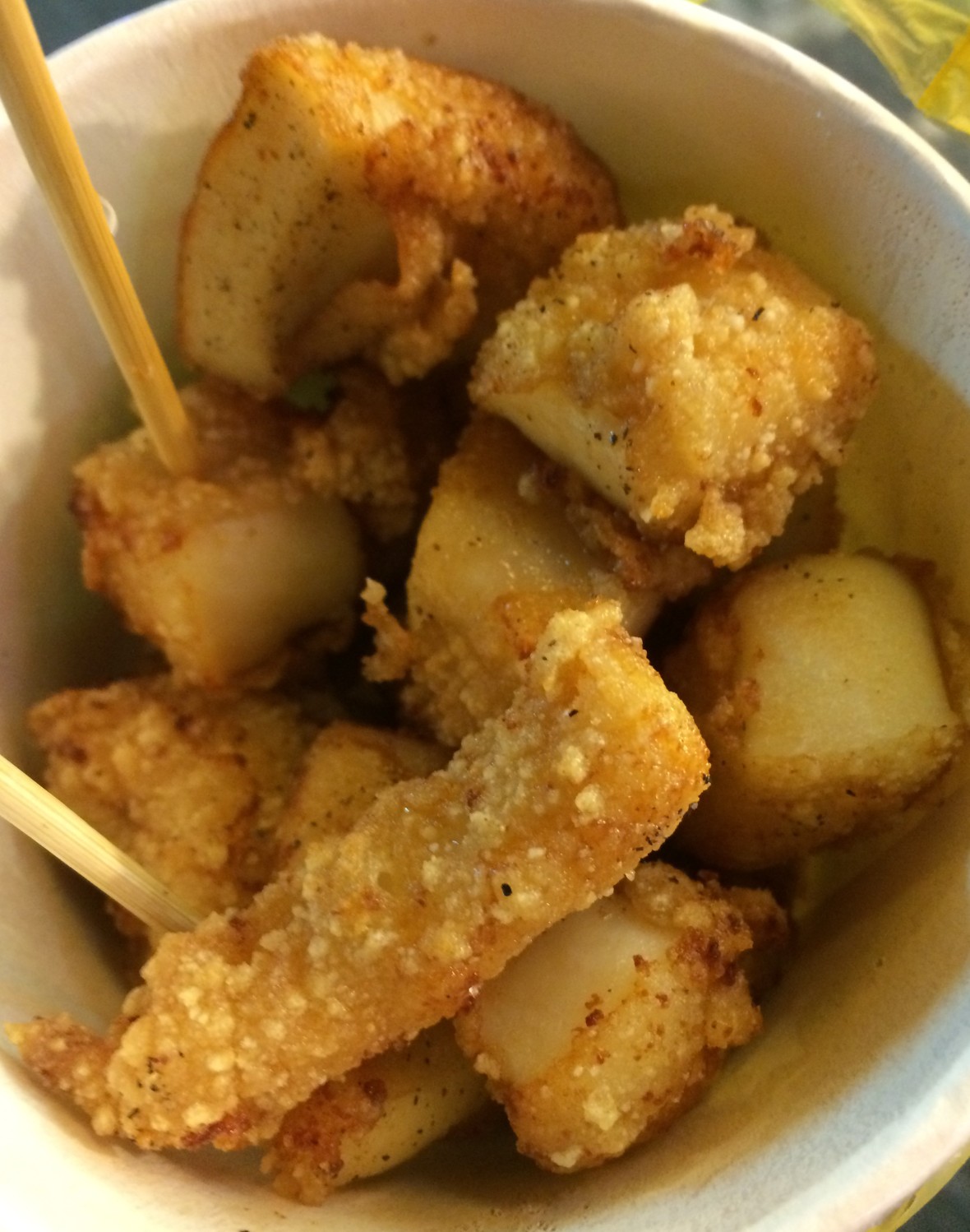 To top off my night, we went back to an old favorite.  Mango and Peach Snow Ice. 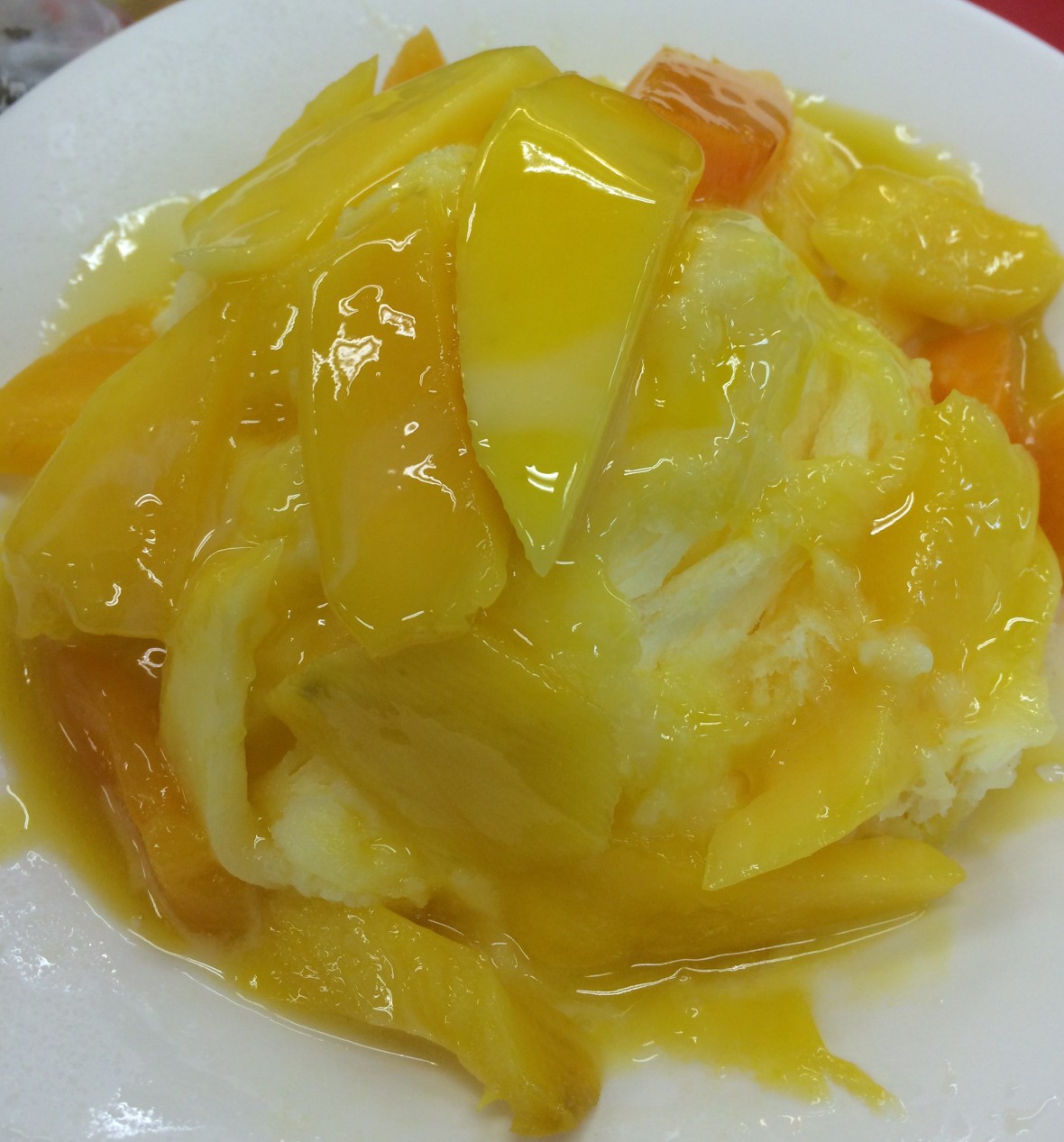 Shilin – Nothing but love.