This year we celebrated Lena’s mother’s birthday at Min Jiang.  We were in the mood for Peking Duck, so thus, this selection.

Located at Rochester Park, this one is more secluded than the Goodwood Park Hotel branch, a little more intimate if you ask me.

Being that it was still the second night of CNY, we went for Salmon Yu Sheng. 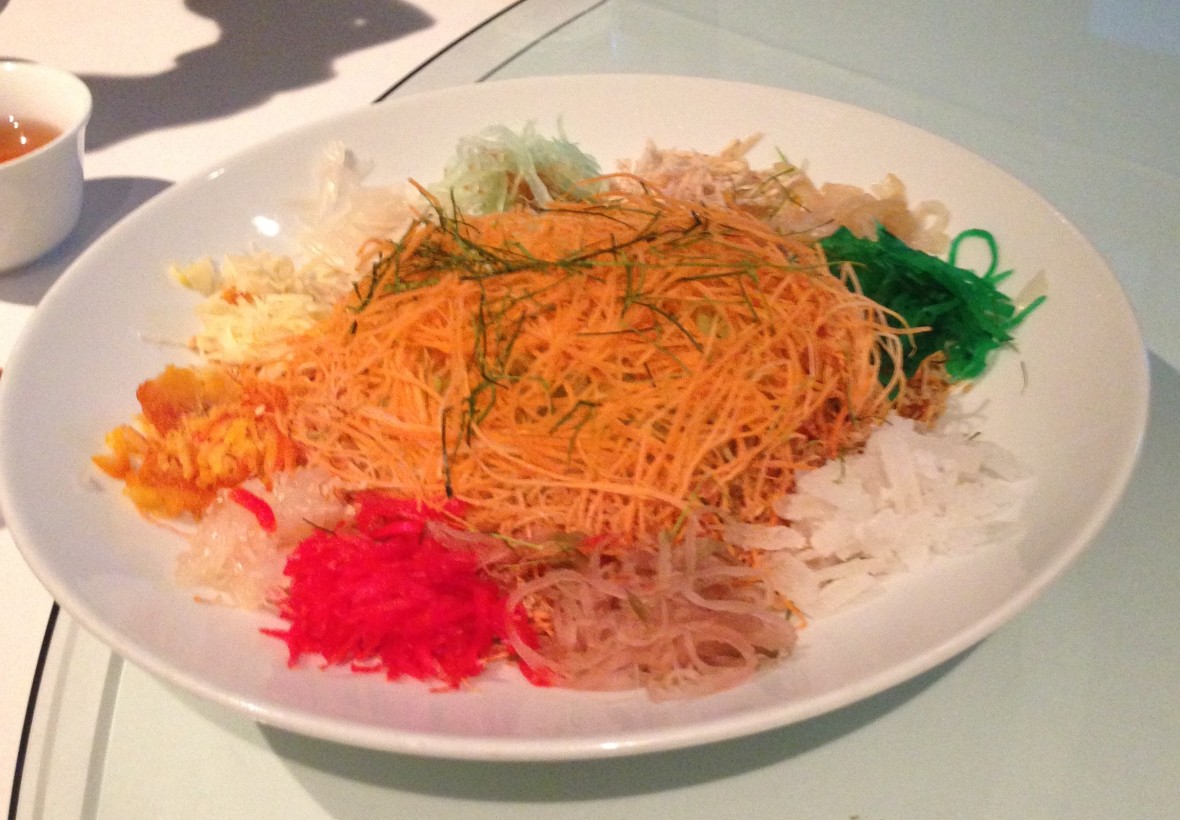 Preparing the salmon with a very interested Hezekiah looking on. 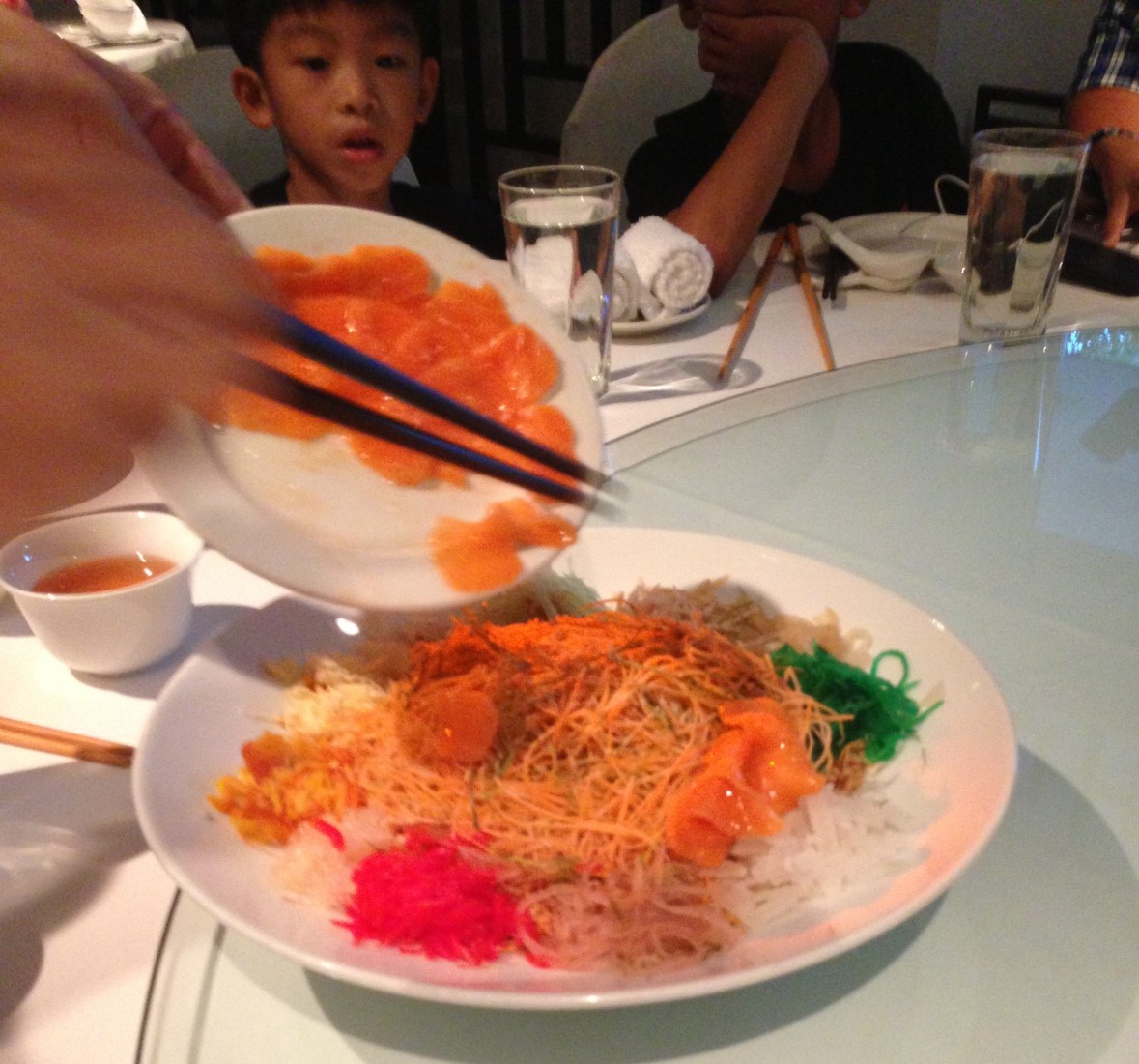 Fully assembled and ready to Lo! 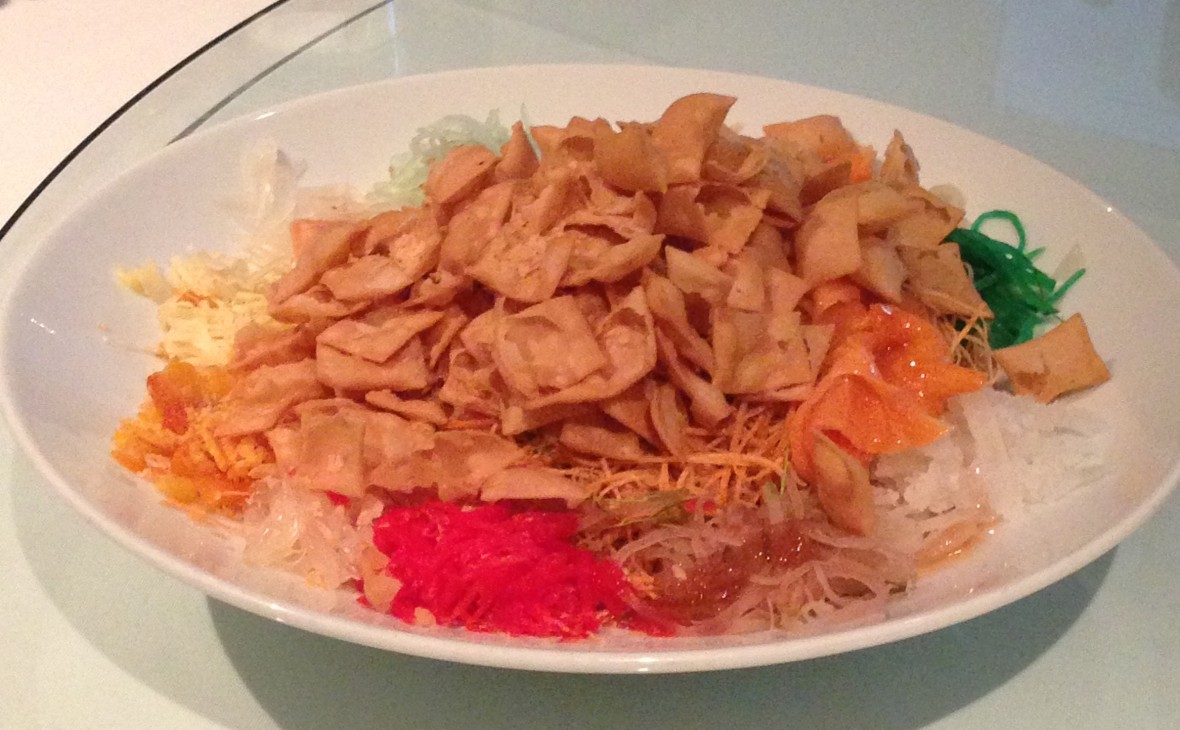 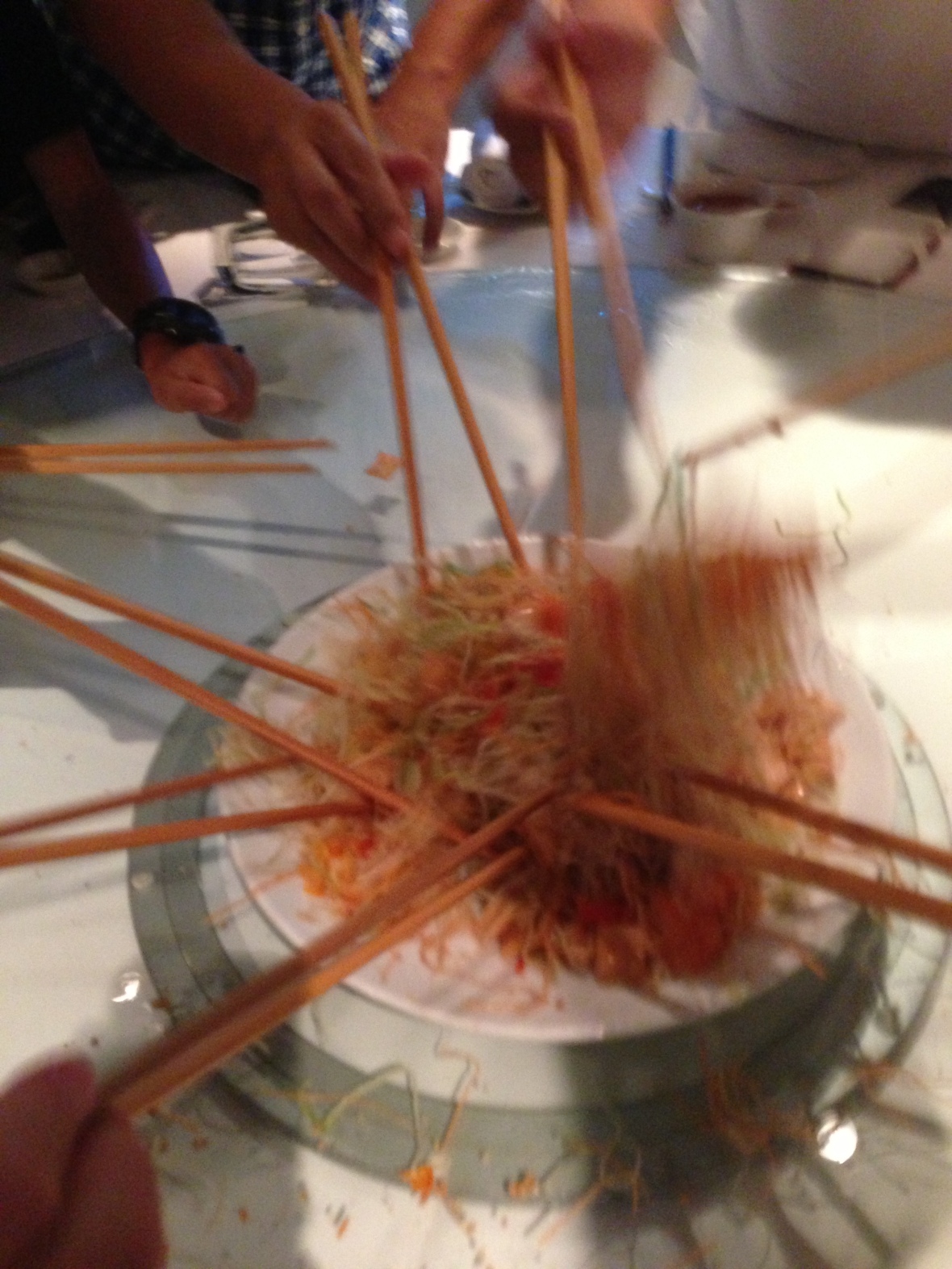 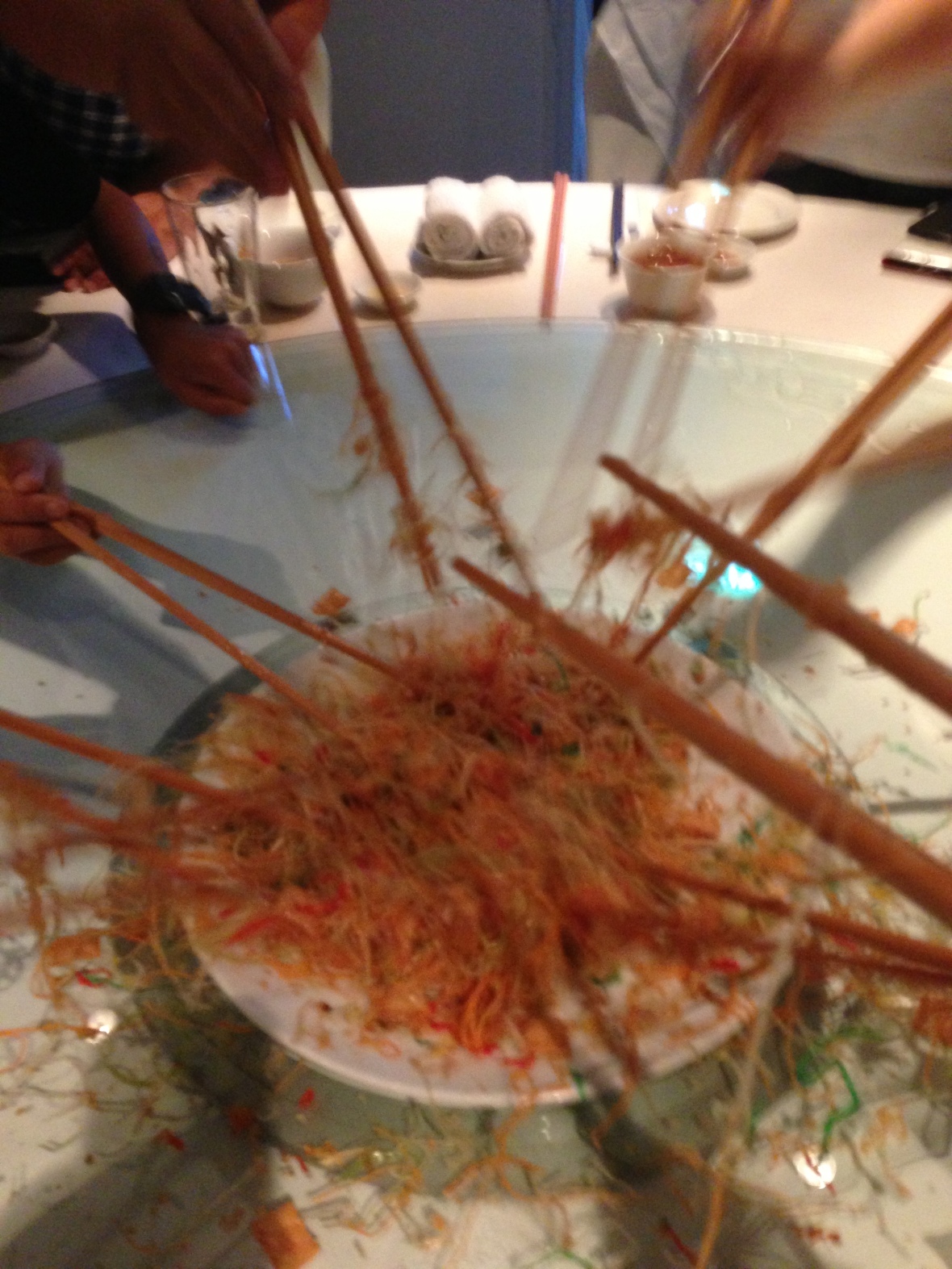 A good job on the Lo Hei!  I got quite a few of the green radish on my plate at the end!

Now time for dinner.  Appetizer ordered was Fried Silverbait.  Nicely crisp, but small portion for the price of $12! 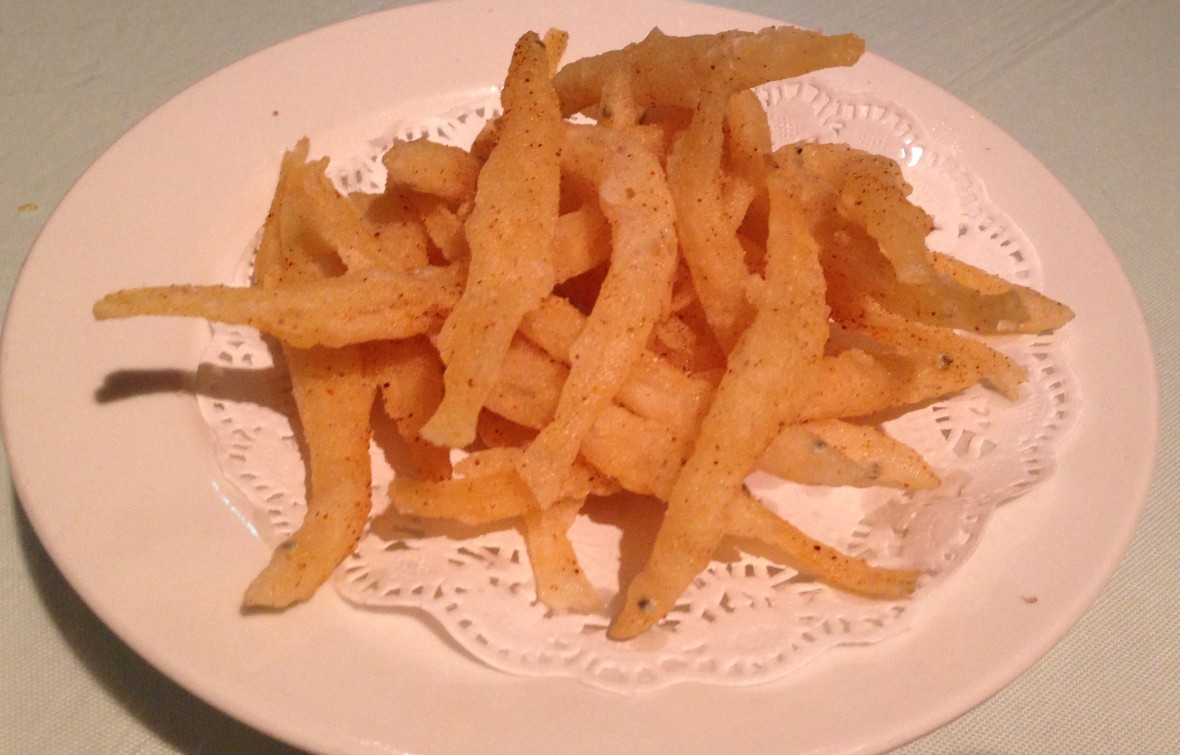 Time for Peking Duck.  The menu at Min Jiang offers the history and how Min Jiang serves it up.

We chose for both styles to be served to us, the traditional Beijing way and then another Beijing way.

Then we chose fried noodles for the second serving.

We ordered 1.5 ducks, which is $90 per duck, $45 per half.  It better be worth the price!  And you have to order in advance, or else it takes 2 hours to prepare.  So we ordered in advance when we made the reservation.

Looks real good to start though! 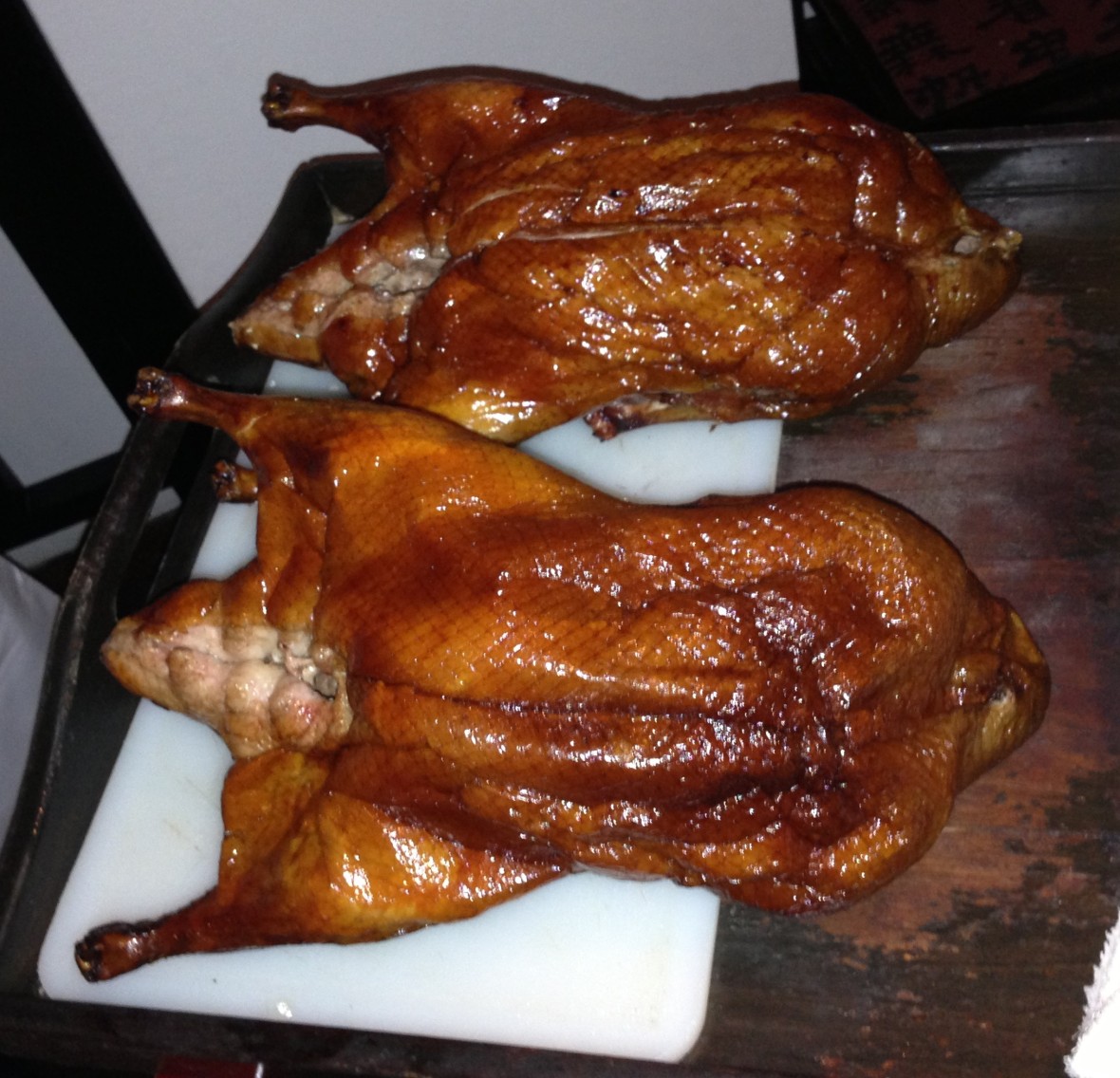 The chef hard at work starting to carve.

The first way it’s served is to take the fattiest part of the duck skin, cut it off, then dip it in sugar to get the taste.  I tell you, the skin was crisp, juicy and fatty.  With the sugar, an interesting combination.

First we were served the traditional way.  The amount of meat I found a little too much, but the meat was very nice and juicy.  I like that they put minimal sauce in it, so that you add more if you want.  That leaves the taste of the duck rather than the taste of the sweet sauce. 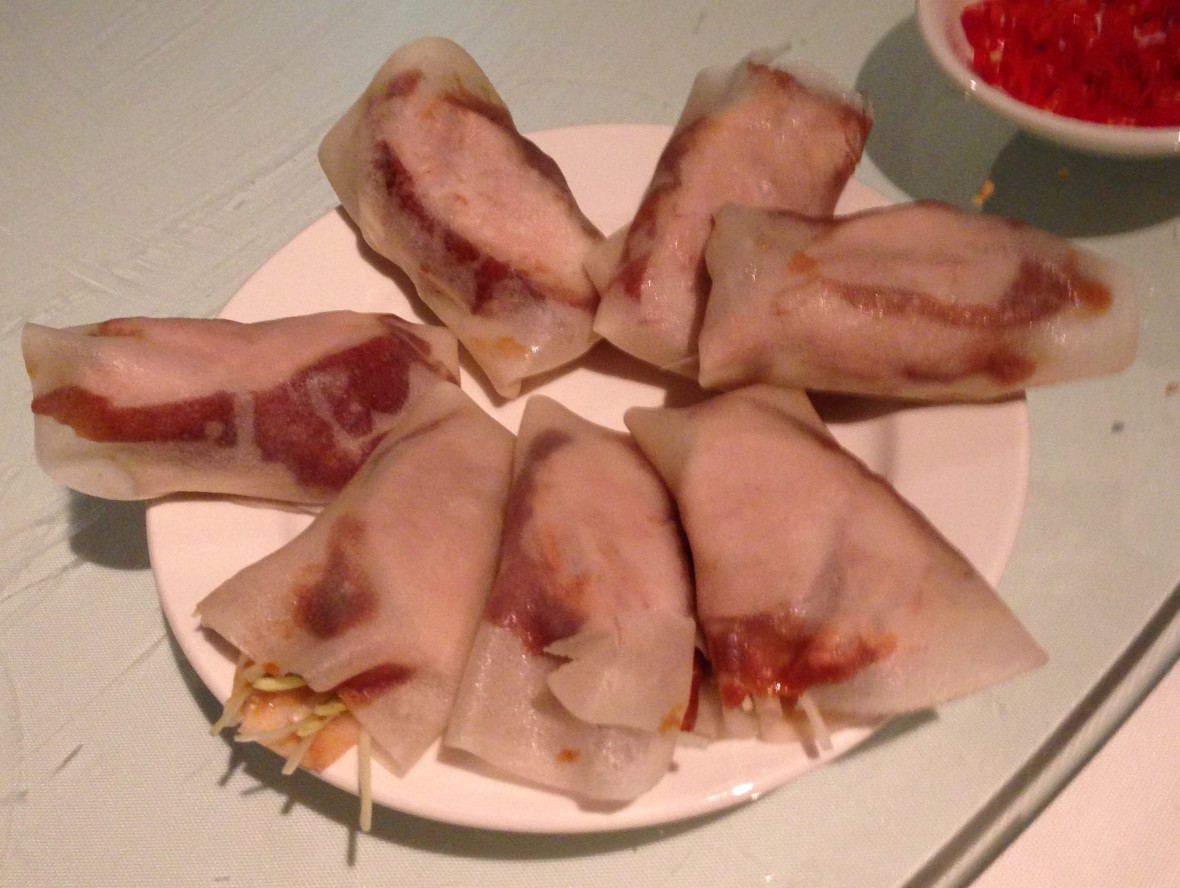 Here is the alternative way.  You can’t really tell from the outside.

I opened it up, but I still can’t really find the difference either except for the piece of cabbage.

The duck was worth it for sure.  The skin very crisp, the meat very juicy, the wrap combination was great.  Loved it.

Time for other dishes!

First up was a duo of prawns.  The left side is with mayo and some sesame.  The right side is fried with milk powder.  Both versions were good, I preferred the mayo version though.

A claypot of tofu, mushrooms and vegetables.

One of the stars of the night was a 1kg steamed grouper.  At $15 per 100g, it better be good.  And it definitely lived up to the hype.  Meat was great, sauce great and a lot of meat.  Worth the money and a great taste.

We ordered some Glutinous Rice with Baby Abalone in Lotus Leaf. 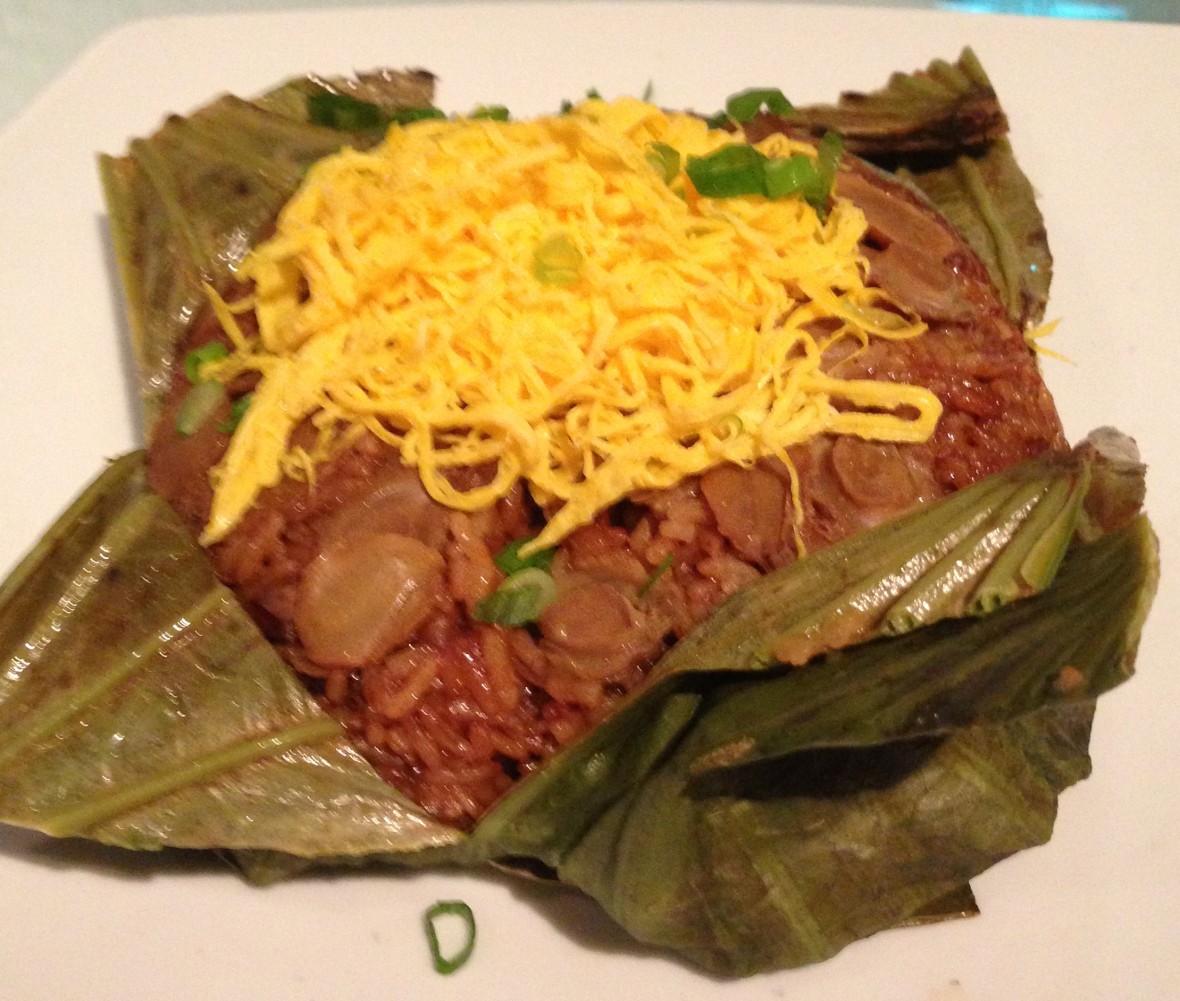 The second serving of the duck was in fried noodle form.  This was a huge hit.  Just delicious! 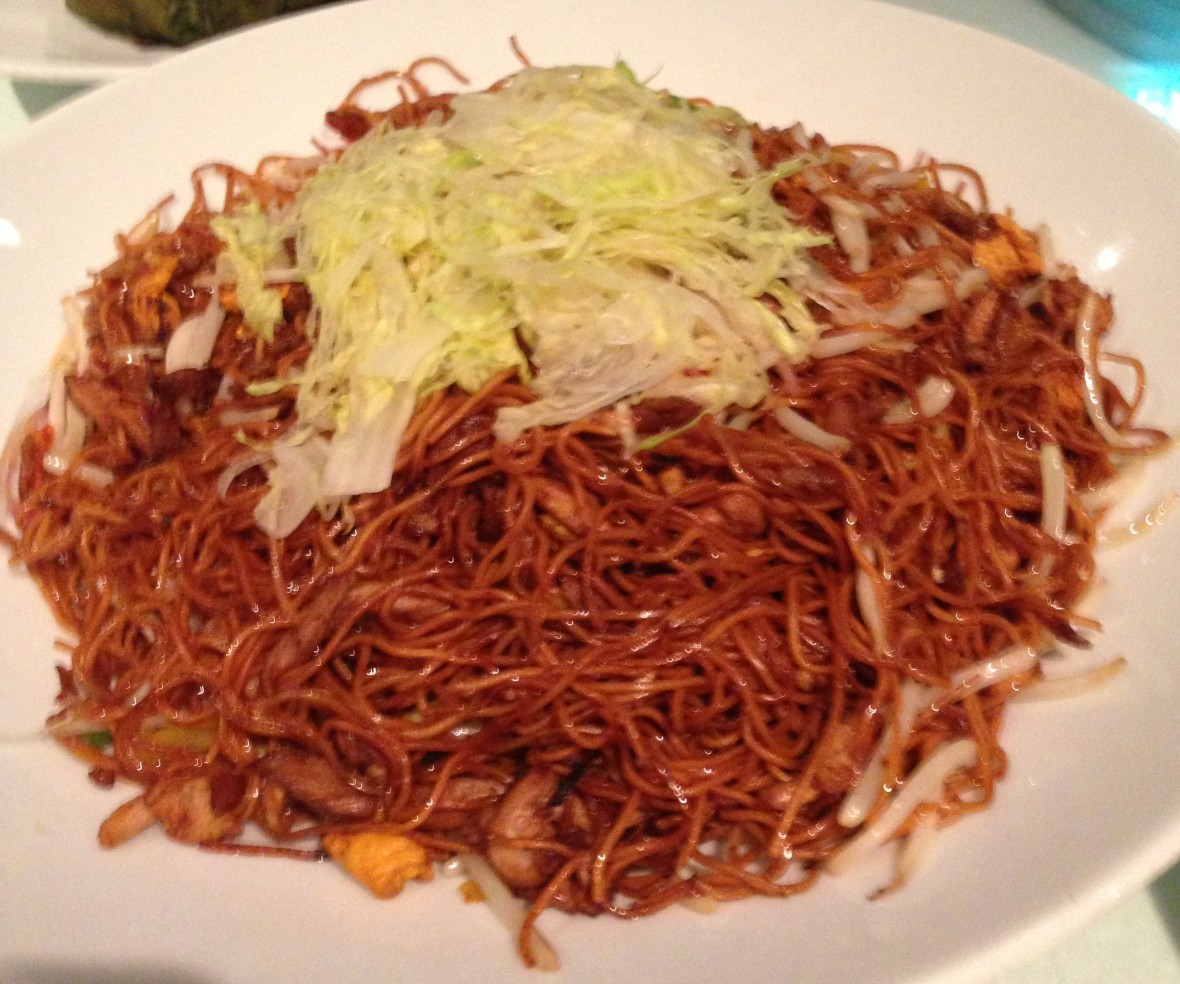 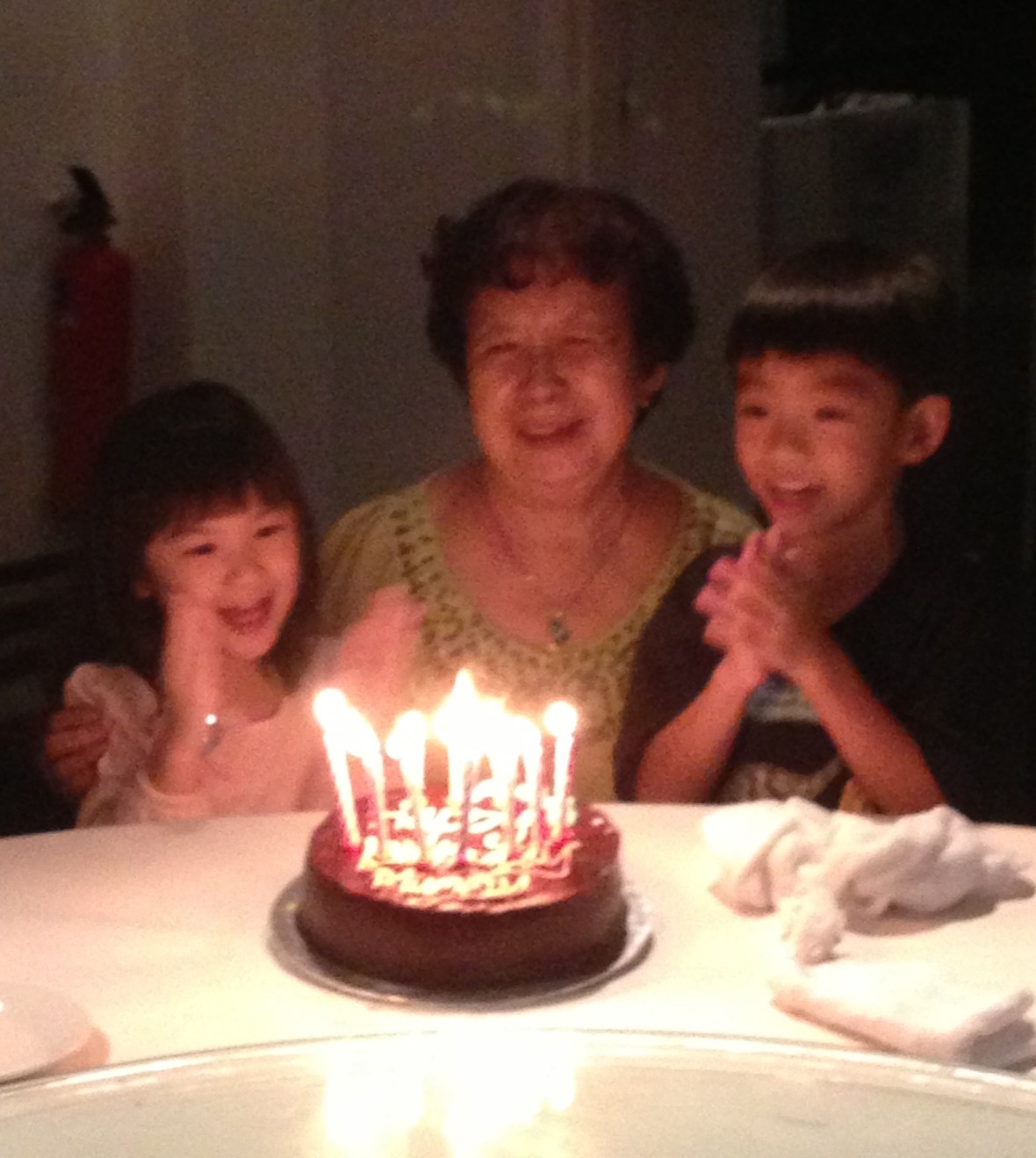