There is one good thing about all of these memberships and points collecting cards, etc.  You get free dollars to spend if you spend enough.  Thanks to a real nice banquet that I paid for, I happened to collect more than $250 of Tung Lok dollars, to offset your bill, one-for-one on the dollars.  But of course the catch is that the points expire.  Because my points expired at the end of July, we had to spend it.

We spent a portion of the Tung Lok Dollars at the Peking Duck outlet at Grandstand previously, and now wanting to try something different than all the other Tung Lok restaurants, we decided to try the MAD restaurant at Grandstand, just to see if it was any good.

Located right at the ground level, it looked interesting.  It is inspired by Singaporean Dick Lee, and the atmosphere was quite nice for a Sunday evening. 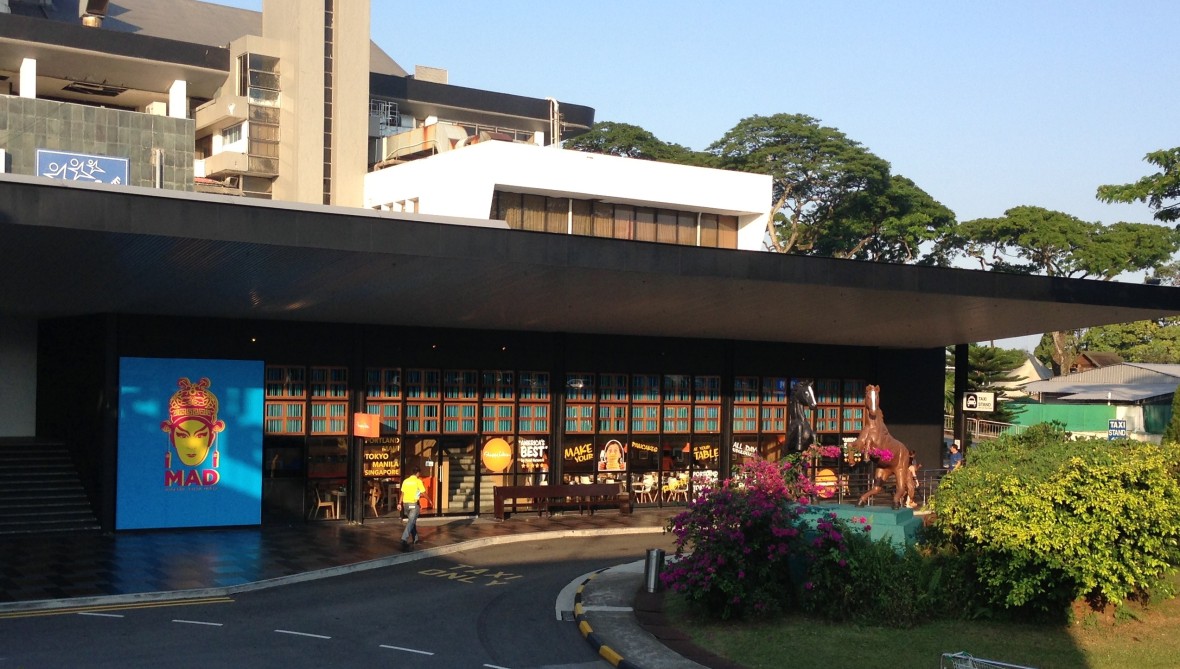 The concept and ambience inside was also quite nice.  I liked that they had semi-booths along two sides of walls.  So couples could sit on the booth and just look out at the rest of the restaurant.  A very comfortable feeling.  I know that for me, personally, and Lena as well, we like to sit on the same side of the table when dining.  I don’t quite know why, but the feeling is more personable when we sit on the same side of the table instead of across from each other. So this seating arrangement was nice. 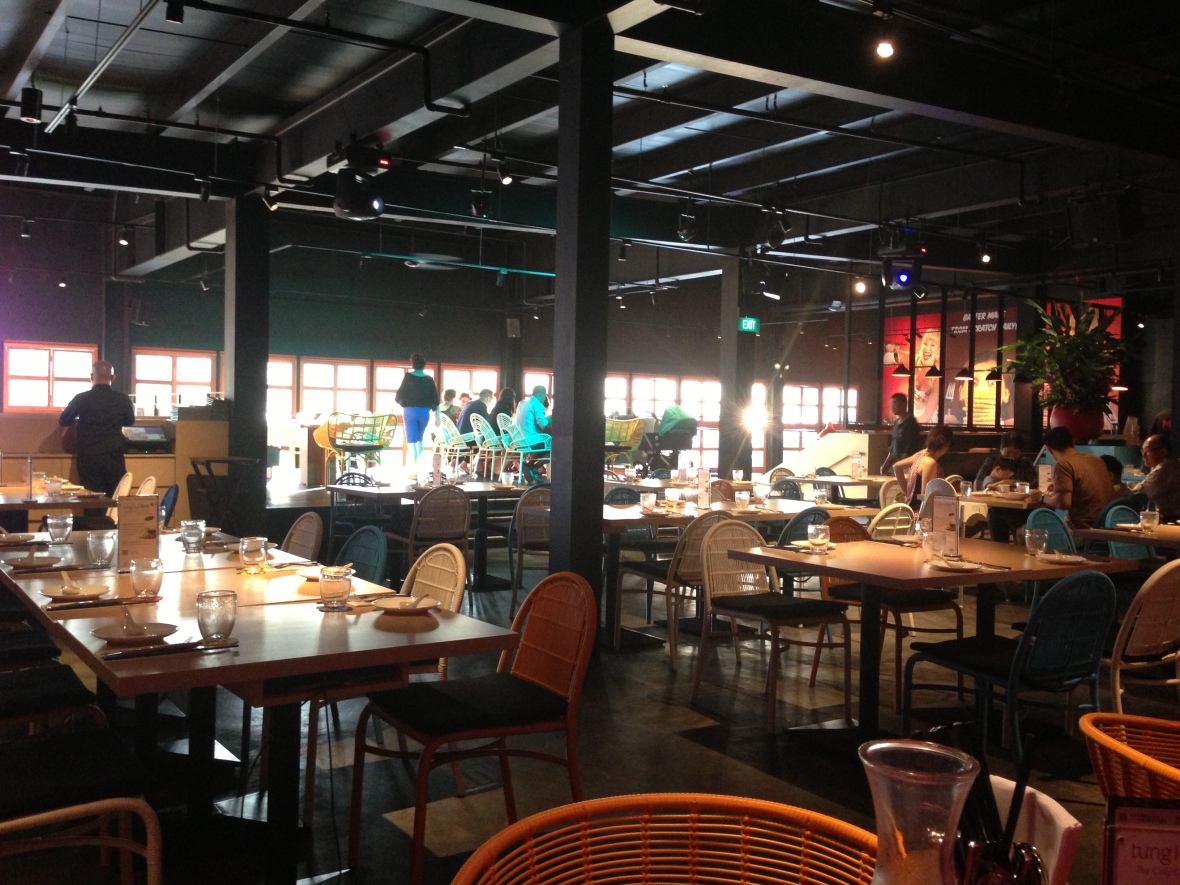 The next thing of interest was that the menu and all ordering are on iPads.  You order right from the iPad, after which you confirm and they come to your table to double-confirm.

OK, let’s go with the food!  We had about $97 dollars worth of food to eat.  So we figured we would order decadent stuff and stuff which we could eat right away, but also stuff that easily could be taken home.

First up, Wasabi Prawns.  I am in love with Prawns when cooked like this.  Either Wasabi style, or the Cantonese favorite, Honey Walnut Prawns, which I always get when back in the US.  It seems like the US is the only place which makes that dish right.  But they love Wasabi Prawns here in Asia, and this one was pretty good.

The Prawns were fried right, but for me, not enough Wasabi Mayo.  It needed some more for me to give it that kick.

Now here comes decadence.  We went for the Grilled Foie Gras and Waygu Beef Claypot Rice.  When it came out, and then we mixed it, you could smell the niceness of it.  Just fragrant and looking wonderful.

The taste, you can’t really beat.  It was oily from the grilling, sweet from the sauce, soft from the rice and the Foie Gras and Beef were just so tender and melt in your mouth.  At $33, it had better be good, and it was!  But be warned, it is a little oily and greasy, so it might send your tummy into a bit of an angry mood.

You don’t see Quail a lot of menus here, so when we saw Mushroom Stuffed Quail, we decided to try it.  A little overdone for my taste, it wasn’t juicy enough, and the mushrooms inside were a little dry.  I would give this dish a miss.

MAD Baby Back Ribs were next.  These ribs were fall of the bone, smothered in a sauce which was biting and quite nice, but, a little too sweet.  I had to scrape some of the sauce off or else it was just too sweet for me.

Waygu Beef Sliders.  After our orders, we had about $10 more to spend, so we went with these sliders.  The beef, shaved nice and thin and tasty, was a little too wet, thus, creating a soggy bun.  The flavor was ok, the bun fresh, but the soggy bun, I can’t quite for that.

Overall, not a bad dinner.  A lot of food, more than I thought there would be, we took a lot home.  It is a good date restaurant.  A lot of people around us were getting dim sum dishes, but for me, the price you’re paying for har gow (about $7 for 4 dumplings), was way too much.  There’s a place for dim sum, and this is not that place.  This is a place to try different fusion style foods and other items you would not normally try.  Great for couples who want to talk about anything over a decent meal.