Nice Spanish food is really a complement to something else.  Sitting around a table with a friend or friends, nibbling on Tapas and having a really good time.  So when my friend Erik came into town, we headed over to Don Quijote at Dempsey Hill.  It’s located on Block 7, right next to Muthu’s Curry and the former Pamplemousse.

Our first course was a Tabla de Don Quijote, S$36, which was a platter of ham, sausages and cheese.

We would have like a little bit more of the Jamón Serrano Ham, but it was a mixture of platters.  It was quite nice altogether, fresh, and a nice little start to our meal.

We had to go for Beef Cheeks in Red Wine sauce, so we ordered the Carrillada en Reducción de Vino Tinto (S$20).  Without a doubt, a must order here.  The cheeks were so tender, and the reduction of red wine made it just right.  We couldn’t get over how smooth the beef was. 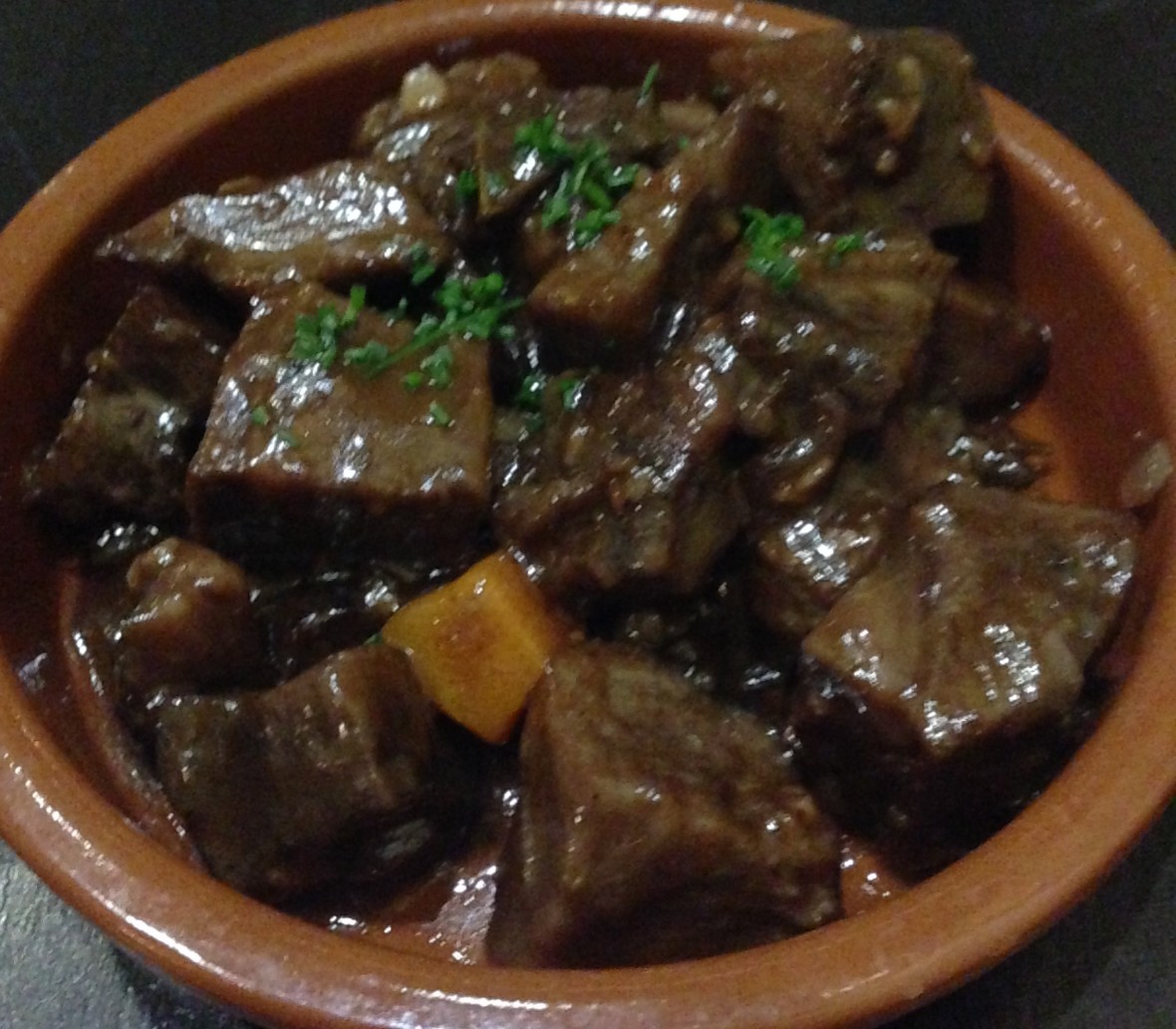 Our next venture was Croquetas con Jamón, a nice croquette with cured Spanish ham (S$16). This was also a winner.  The crispy texture on the outside gave way to a beautiful smooth potato finish on the inside with bits of ham. 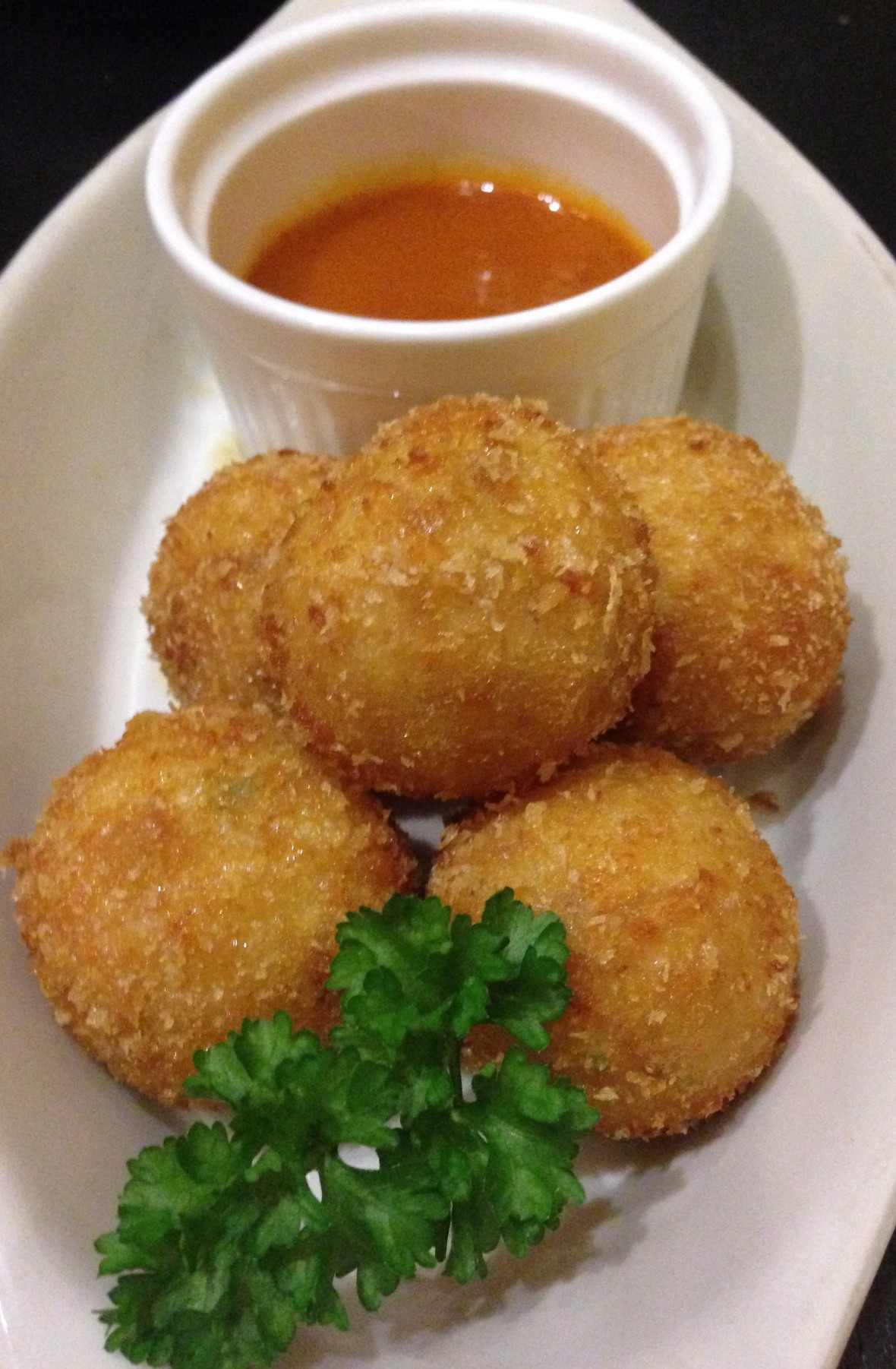 Topped with a little spicy tomato sauce, it was perfect.

Huevos Estrellados (S$15), a simple Madrid-style broken egg with chorizo and potato wedges.  This is a very simple dish, but it is so flavorful.  The chorizo is nicely done, the egg cooked nicely and the potato, roasted to perfection before being the base of the dish. 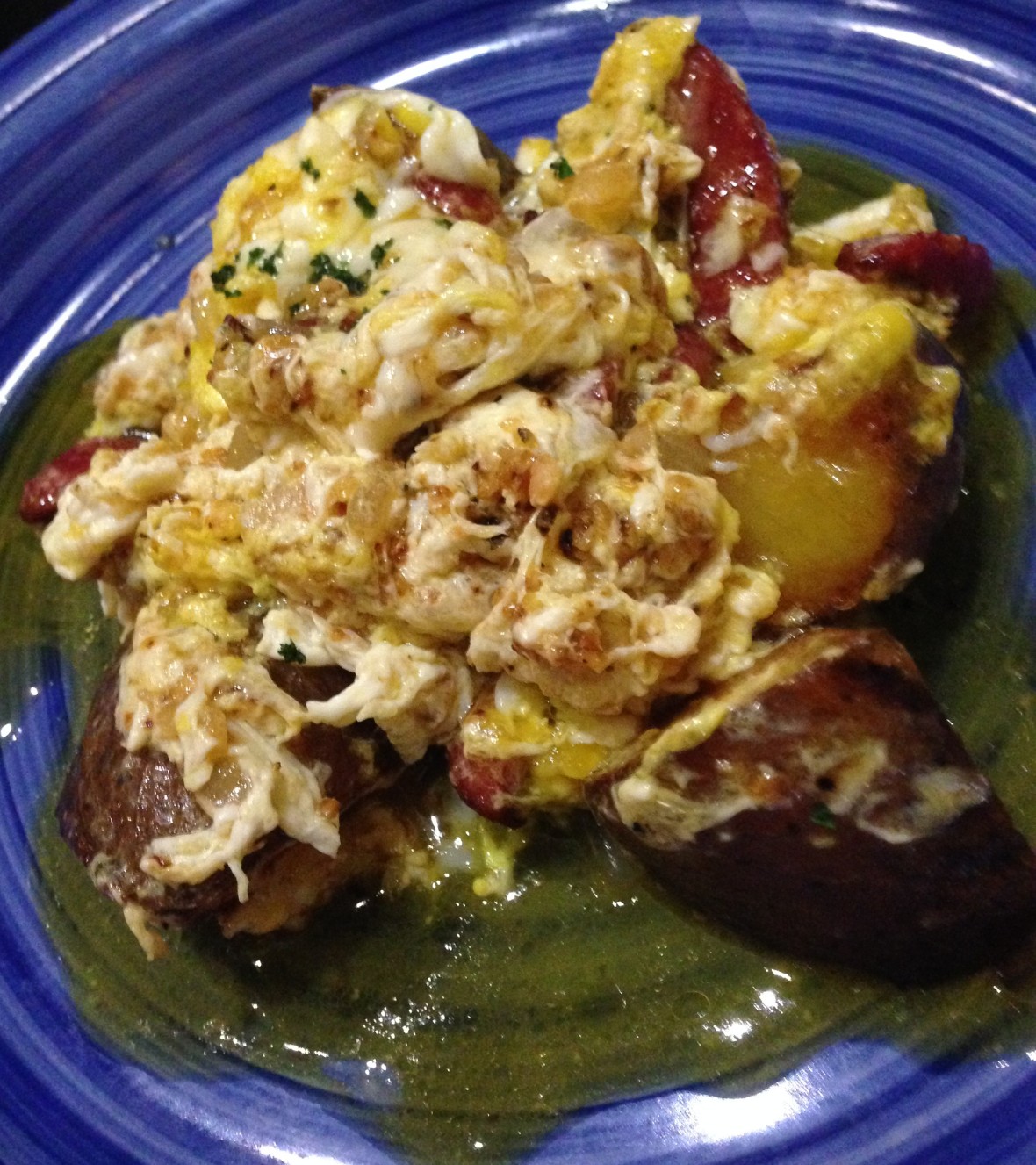 We saw Albóndigas con Manzanas y Piñones (S$13), and decided that it sounded so different.  Meatballs with Apple Sauce.  When it came, there were chunks of sweet apples on it, with some pine nuts.  An interesting taste to say the least.  To me, the meatball was a little too bouncy, not enough tenderness to it, and the apple made it too sweet.  Not a real good dish if you ask me. 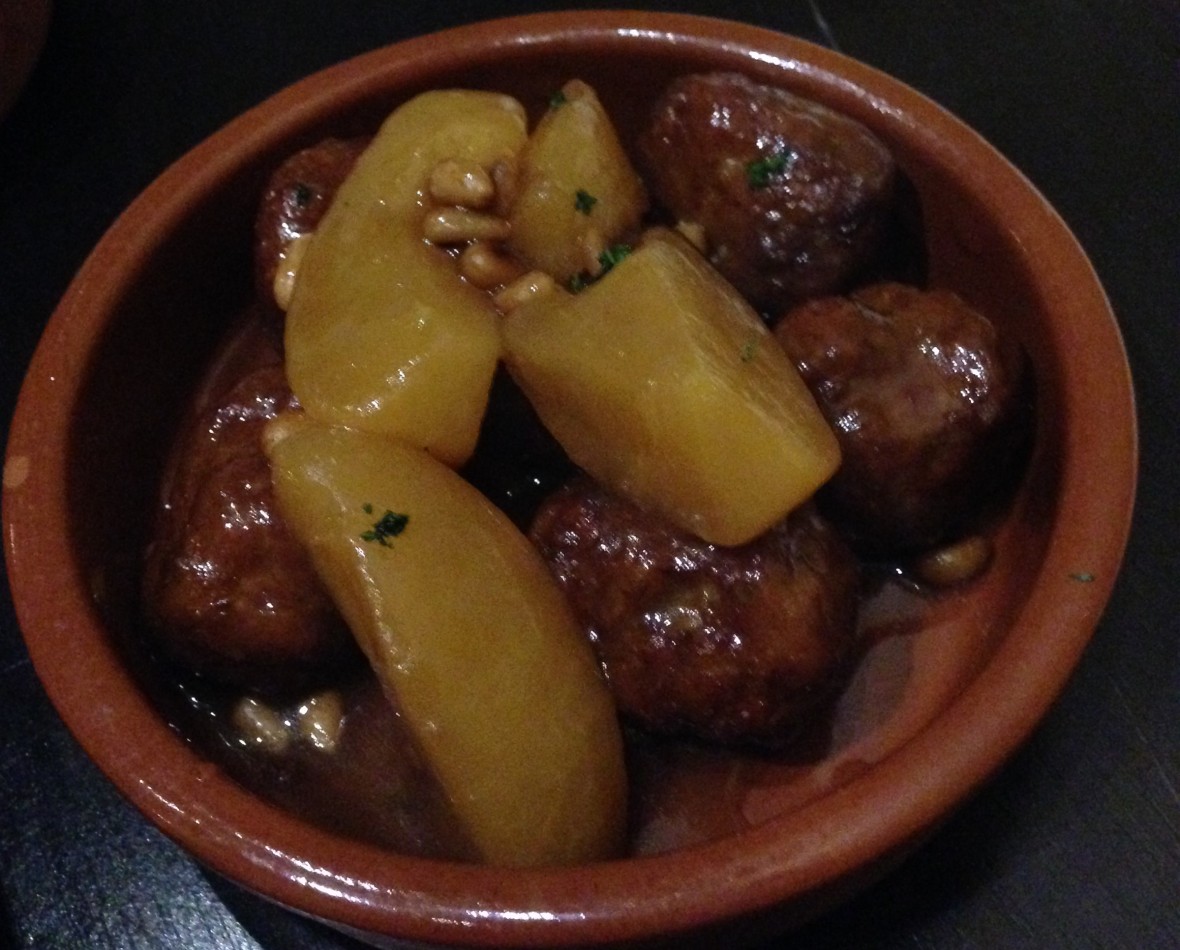 Rollitos de Repollo con Arroz (S$13) is rice, bacon and nuts rolled inside of cabbage.  It looks like it was pan fried afterwards to give it some color and greasiness.

Inside the rice is a little bland, I would have preferred a nice little sauce to go with it.  I would take a nice Polish Galumke over this, but with some sauce, this would have a better chance of making my must eat list.

Our final tapas of the evening was a nice Berenjenas al Horno, Eggplant baked in a casserole (S$10).  Now when it came out, we thought it was huge.  A big pot and when we lifted it, it was more like a soup.  There was a whole eggplant inside!

The star of this dish was not the eggplant, but the broth.  The broth was so sweet and flavorful from onions, tomatoes and celery.  It was just fantastic to drink the broth!  The eggplant was well cooked also.

To close out our evening, the Paella.  We ordered the house special, a small one for S$48.  It contains seafood of a high quality.  And you get your choice of al dente rice, or normal rice.  We went with normal, as we both like a softer touch to our rice.  And a chance to let the broth soak in. 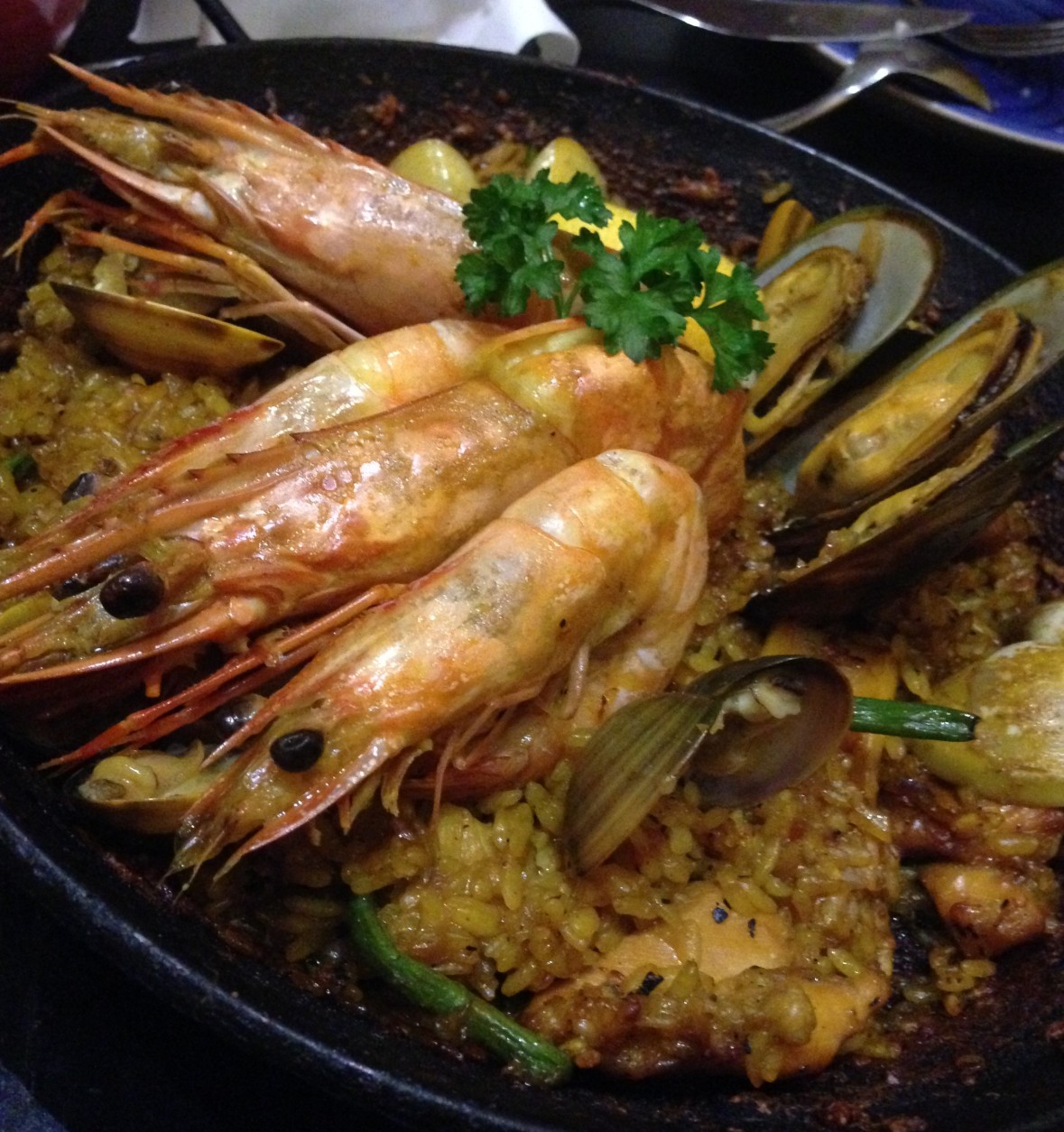 I have to say that I was disappointed with this.  I thought the seafood was a bit overcooked and the rice was too dense, too many flavors in the broth that took it away from the real taste of the rice and the seafood.  All herbs and seasoning really.

The main point of Spanish Tapas restaurants is to enjoy yourself over conversation and nibble on food.  Mission accomplished.  I’ll be back to try some of these tapas again and to try different ones I haven’t tried before!