If you asked someone in Copenhagen what is traditional, they would tell you Smørrebrød.  Traditional open-faced sandwiches with all sorts of toppings, usually on Rye bread, but it could be any other kind of bread.

My local friends in Copenhagen told me about Told & Snaps, right by Nyhavn, where they serve a great Smørrebrød.

It’s a small place inside, with a nice bar and ample space.

We came at about 1:30pm, so it wasn’t too crowded as the lunch hour was about over.

Getting to the Snaps portion first, this is a liquor, almost like Schnapps.  But they make it themselves as well as carry other lines.  We decided to try the Told & Snaps Special.  The waitress told us about it, how it has anise flavoring, as well as cumin and others.  It sounded interesting. 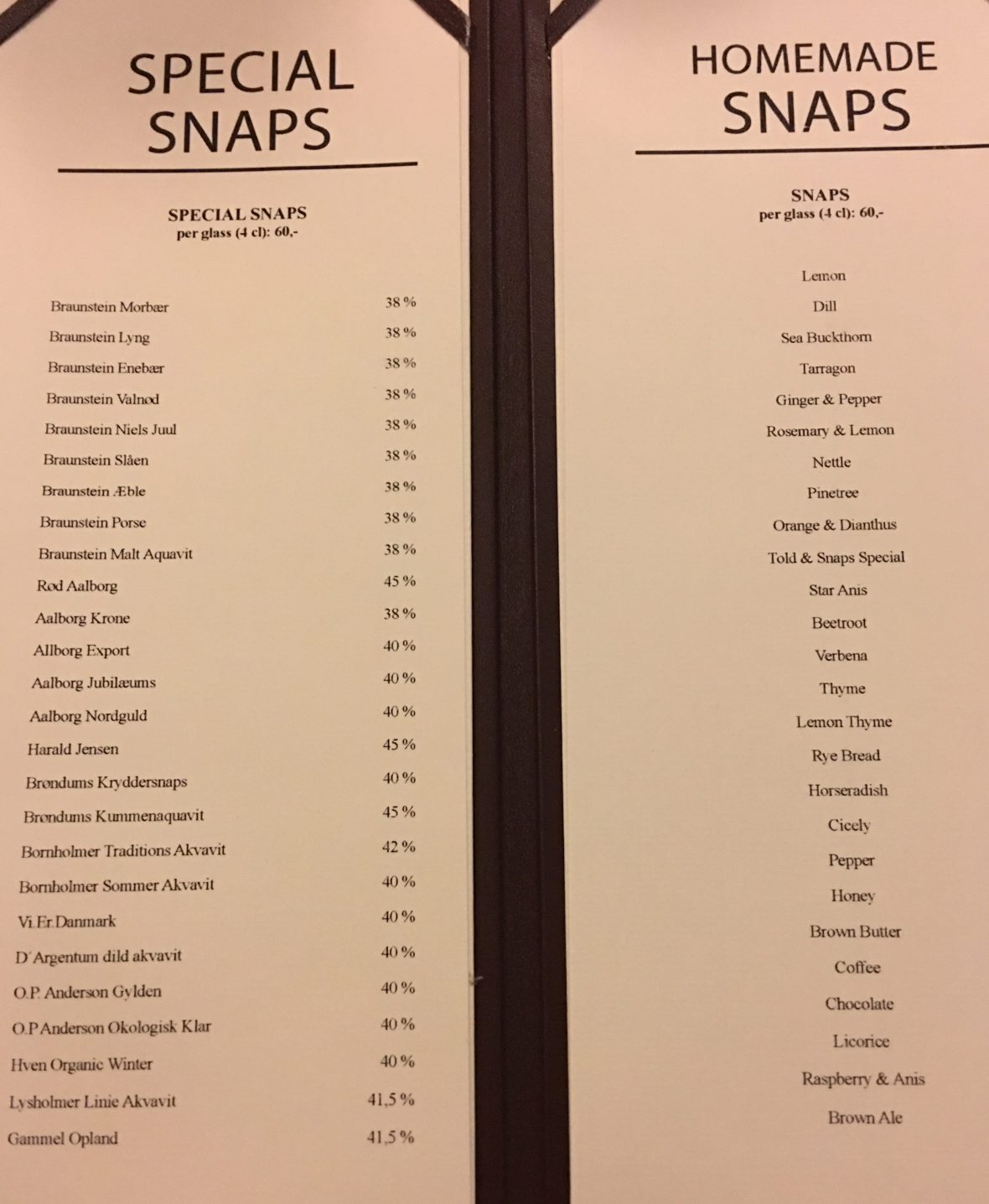 Here is one shot, split into two.  She was quite generous with us, allowing us to try without making us buy two shots 🙂

Very strong alcohol, but warming on a cold day.  The taste was there too. And me, not being a drinker of alcohol at all, liked it, but it was smooth going in and hit nicely.

Now onto the Smørrebrød!

The menu is pretty large and there are a lot of choices to be had here.  We wanted to try different items, so we take a stab at some of the good ones, and then asked our waitress what is recommended.  The waitress was extremely helpful and described a lot of the dishes, but she said that what we chose was a great representation of Smørrebrød.

The first one out was Greenland Shrimps with Avocado and Thousand Island.  Not on traditional Rye Bread, but on Butter Fried Toast.  Wow, what a great taste, fresh shrimp and it all mixes very well. 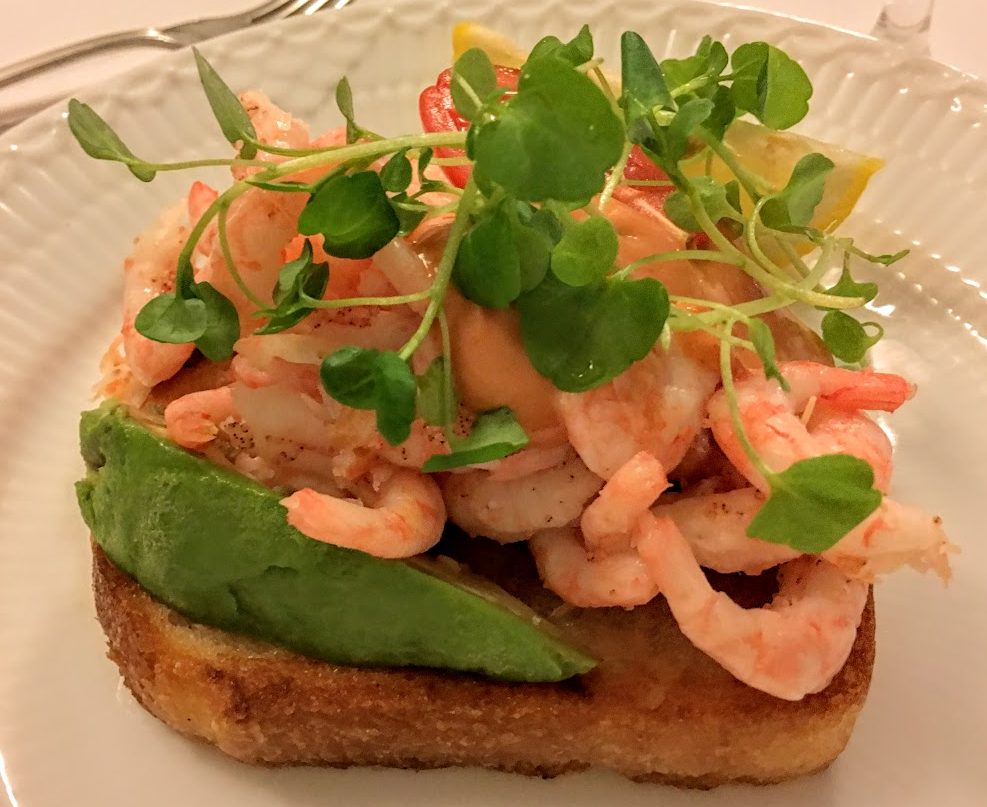 Next up was Jacob’s Special – Pickled Herring, Bacon, Egg, Red Onion, Mayo and Chive.  I’m not a big herring guy, but this one was nice and flavorful.  A real nice combination as you put it all together.  This one is on traditional Rye.

Next was Roast Beef with Remoulade, Fried Onions, Cucumbers and Fresh Horseradish.  This was pretty good as well.  The fresh horseradish made this dish for sure.

Next was a warm Liver Pate with Pickled Beets, Cucumbers and Rye.  With Bacon and Kale on top.  Warm and inviting, Lena loved it. 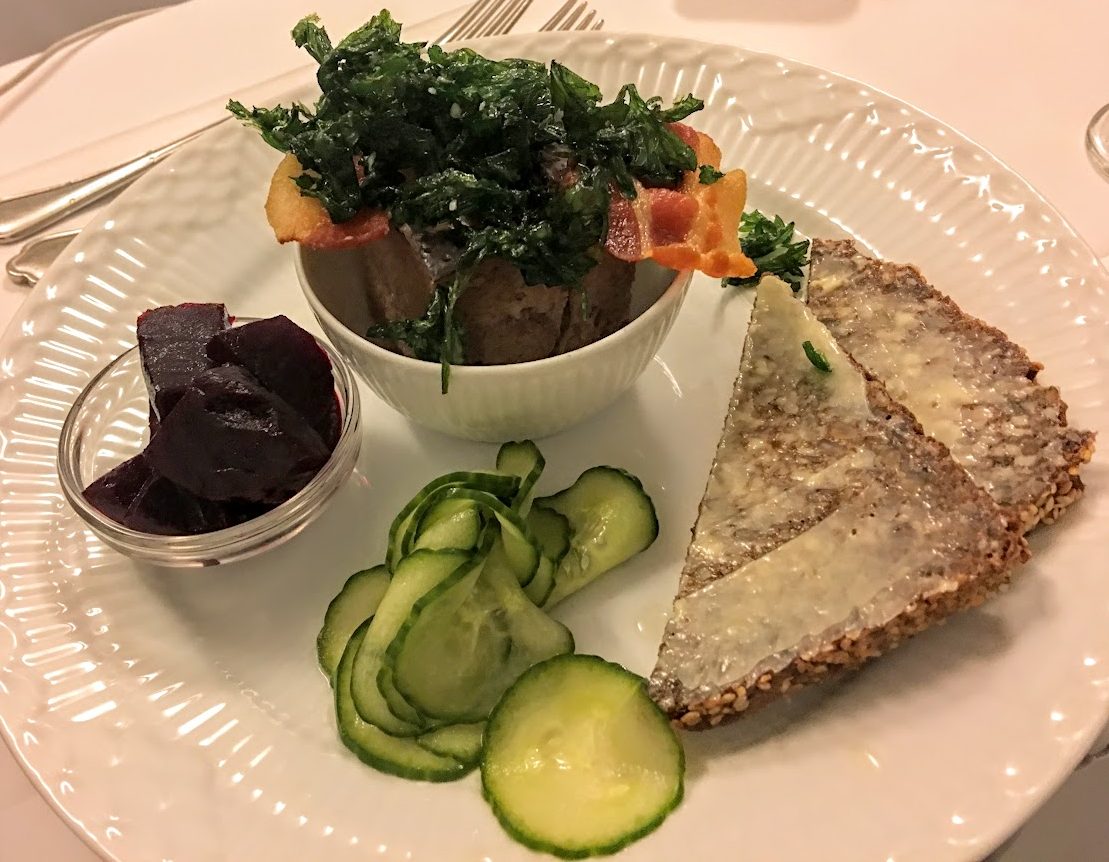 Finally to end it all some Danish Gorgonzola with an egg yolk. Putting it all together was a dream.  I understand that Gorgonzola is a love it or hate it cheese, but me, I love it. 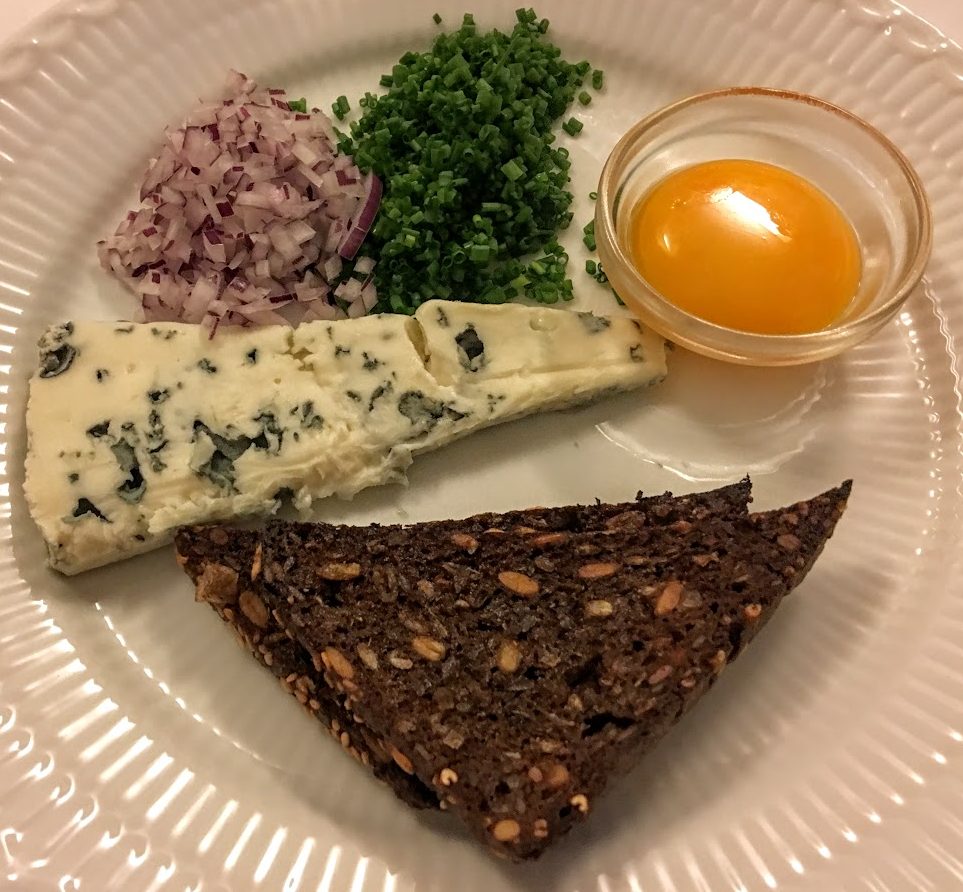 The interesting thing here is that at the end we were so full, that we didn’t want the last dish, but the waitress made a half plate for us. If we had known that before, perhaps we would have gotten more half plates.

She mentioned that each dish was small.  It definitely was not small to us!

If you want Smørrebrød, I definitely recommend this place.  It is not even 20 meters from Nyhavn central, a little further down.  Worth the time, effort and energy.  Go here!