It’s not often you get a chance to dine at two-star Michelin restaurants.  I had the chance to go to Restaurant AOC in Copenhagen the other week.  I wanted to know what it was all about and how the food and service makes it an experience.  I found out in good time.

Located in the basement of a historical building, it’s a little difficult to spot right away.  The sign is a little small, but it’s there!

You head through the doors and a small sign tells you to go through this door. 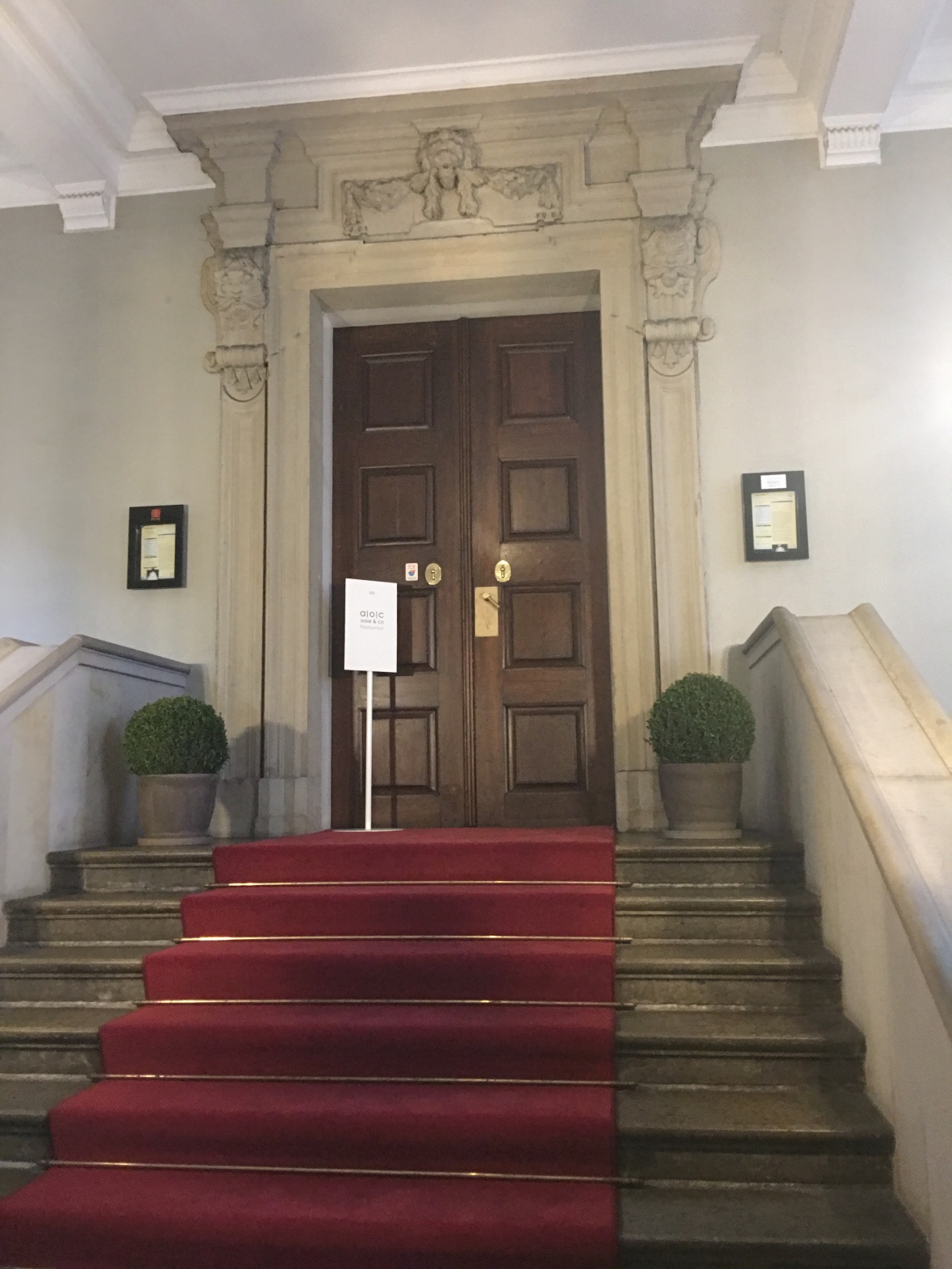 Then it’s through a glass door.

Down a set of stairs. 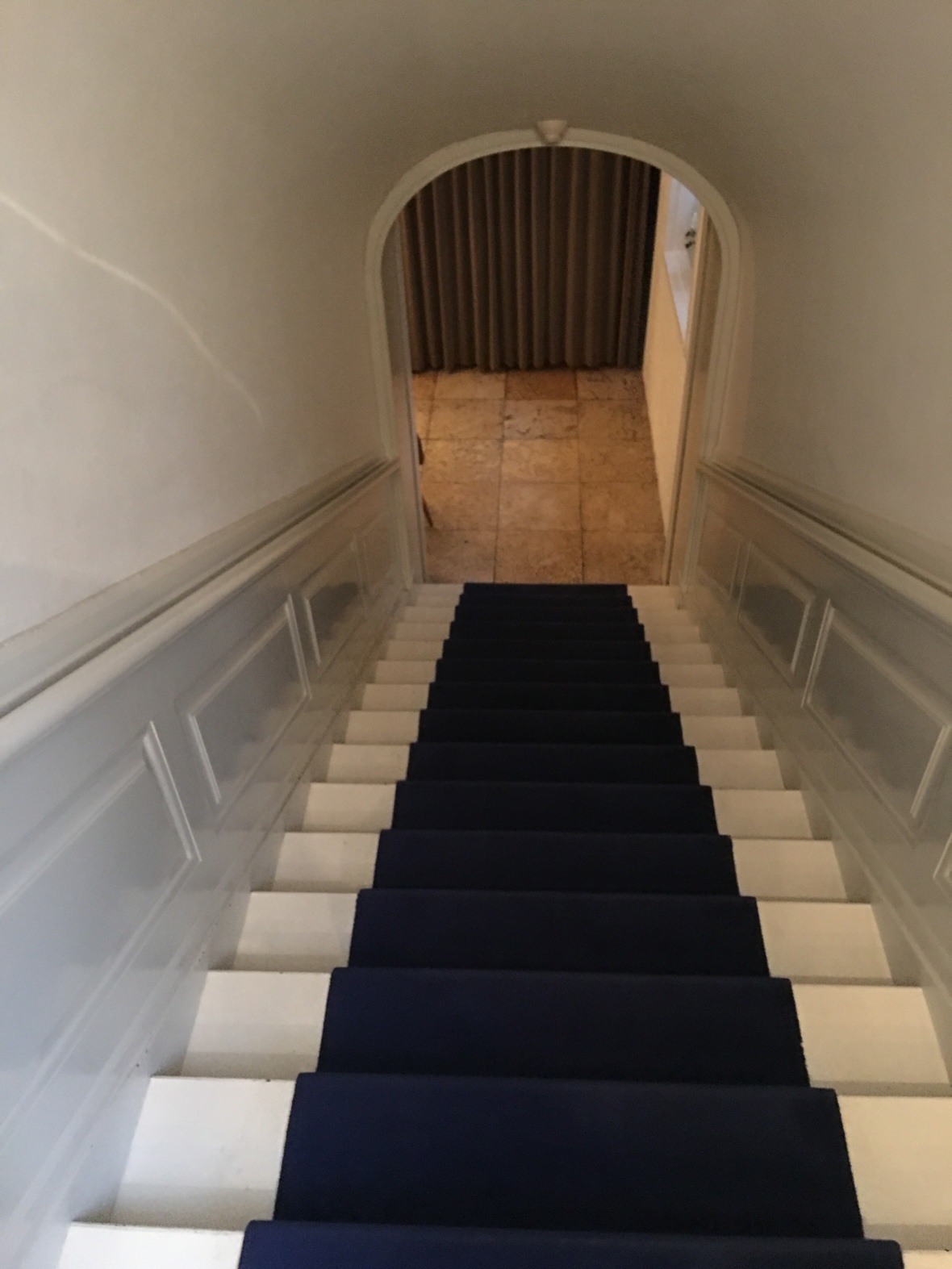 And then it’s a long hallway, with a lounge on one side and the dining room to the right.  The tables are spaced nicely apart so you have some privacy and there aren’t many tables at all.  Maybe a total of 15 tables.

Down the hall and all the way to the end is the kitchen where everything is prepared.  Here you can see Chef Søren Selin heading up his kitchen and giving the hi sign!

Taking a look at their menus, there are two choices – Less or More.  Here is the Less Menu along with a lesser Wine or Juice pairing.

Then you have the More menu. 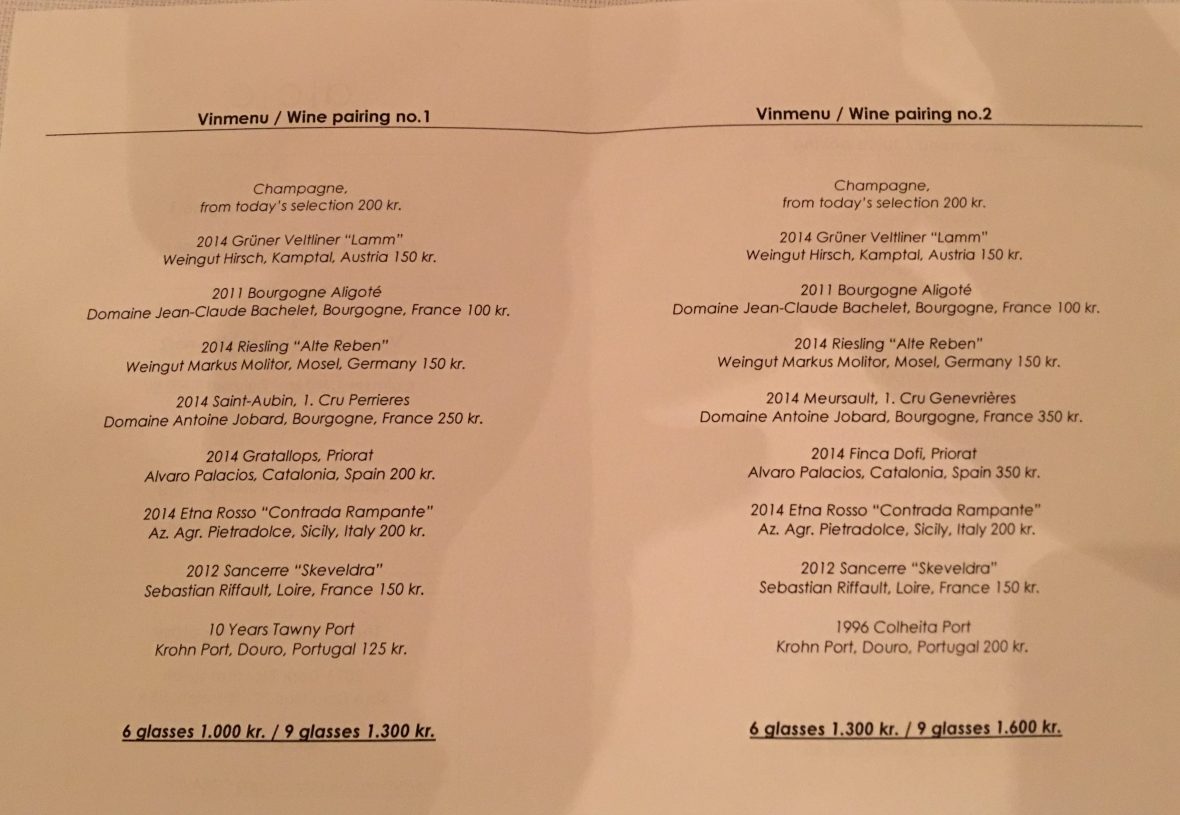 And the Juice pairing. 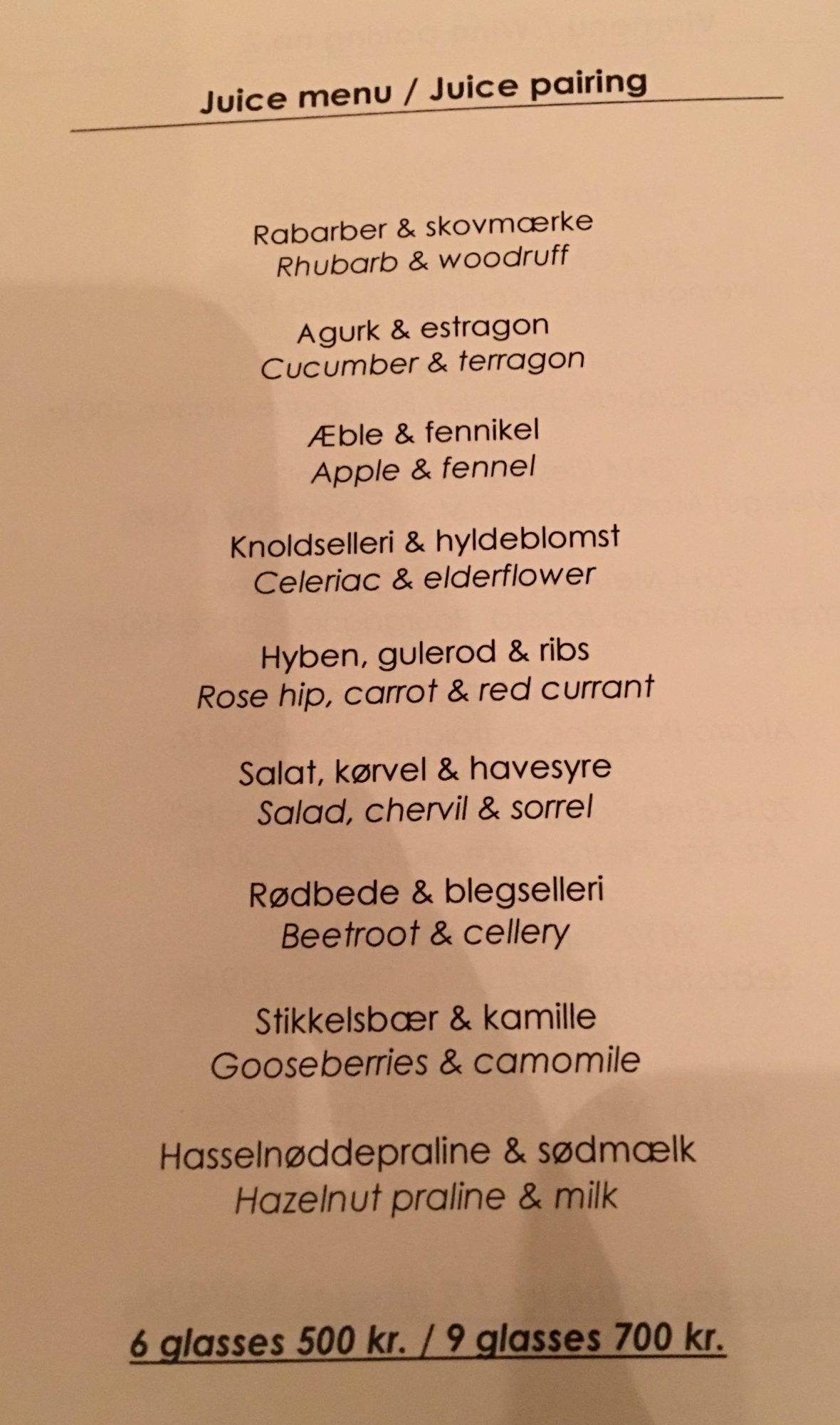 What to choose?  For me, the More menu and the Juice Menu.  They lay it out in front of you to follow along as you get your courses!  BTW, the water is free!

First up was the first Juice of the night.  This is Rhubarb and Woodruff.  Apparently one of the staff, Jeppe Deppedue, created the juices on the menu.  I didn’t know this until after the meal.  This was light and refreshing.  It was considered to be like an aperitif. 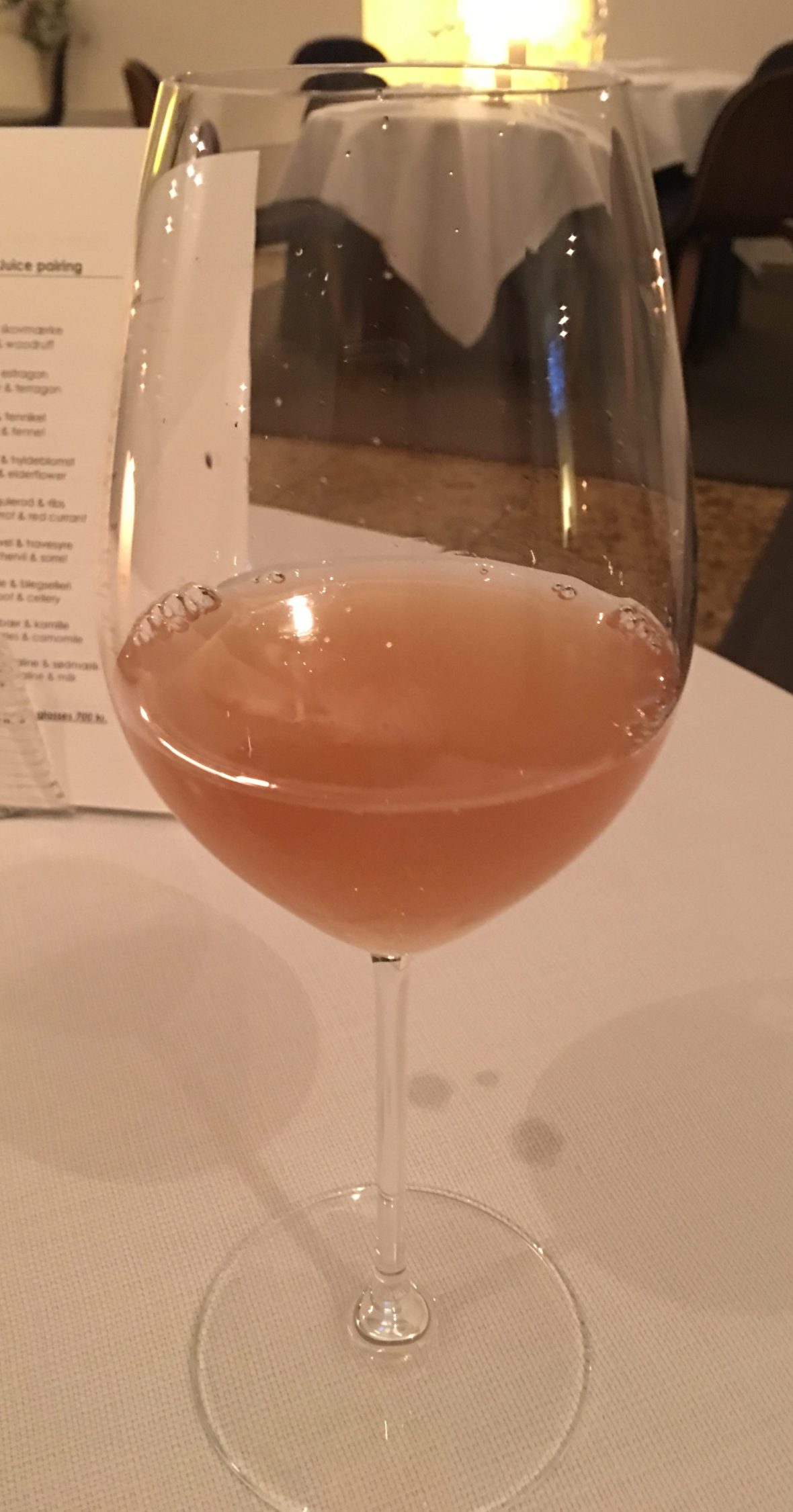 Received some snacks to start.  This was a veggie starter.  I tried to listen as well as I could and record what I could, but sometimes, it was a struggle because there are so many ingredients and the dishes are so complex.

This had Kale and Sprouts wrapped with something.  All I can say is what a nice bite to start.

Next was a Danish Cucumber pickled and salted on a bed of Pine branches.  The Pine is to bring out the flavor of the Cucumber.  It’s all about the senses when dining is what I was told.

A duo of crispy balls. On the left is a Potato Ball with a cheese inside.  On the right is Reindeer Mousse on the outside and Chicken Liver Mousse on the inside Ball. Light and airy.

The next dish was Roasted Celeriac in straw.  Take out the Celeriac and spread the Butter Cream and Roe on it to create a nice crisp warm texture.

Next up is a Pancake with a mixture of ingredients.  From Right to Left, Spring Onion Flowers, Cress, Ox Tartare, Lumpfish Roe, Parsley Cream, Horseradish Cream and Powdered Beetroot. 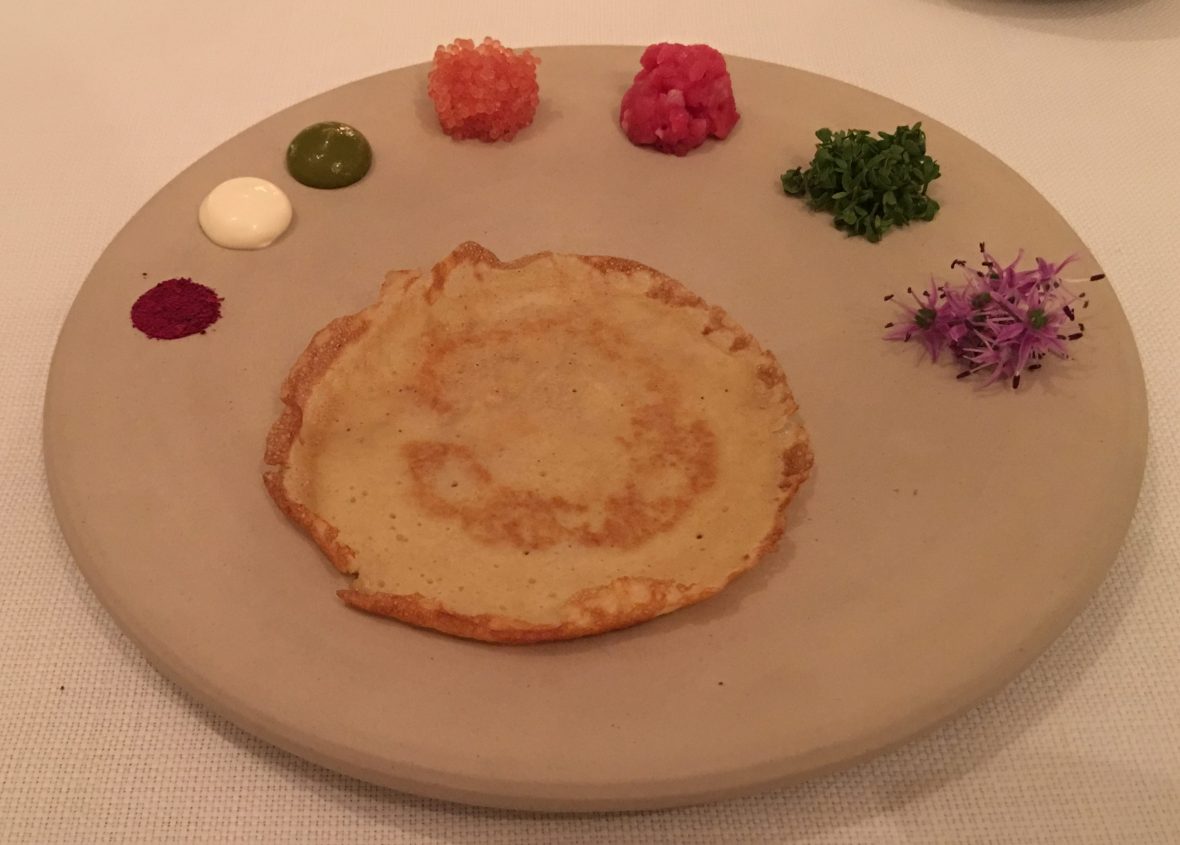 I was instructed to put it all on the pancake and roll it up like a cigar and eat it.  I went with more of a taco/burrito, but it was a great combo of flavors.

Next was Deep Sea Flouder off of Denmark’s coast.  Grilled with the bone-in, on top is a cheese made from straining it through corn and other items.  Very delicate and just awesome.  I could have eaten about 20 pieces of this.

With the amuse bouches and assorted items to start the meal going, it was on the next juice and the main menu.

Cucumber and Tarragon.  Very green tasting and it goes well with the next course.  Not my favorite juice though. 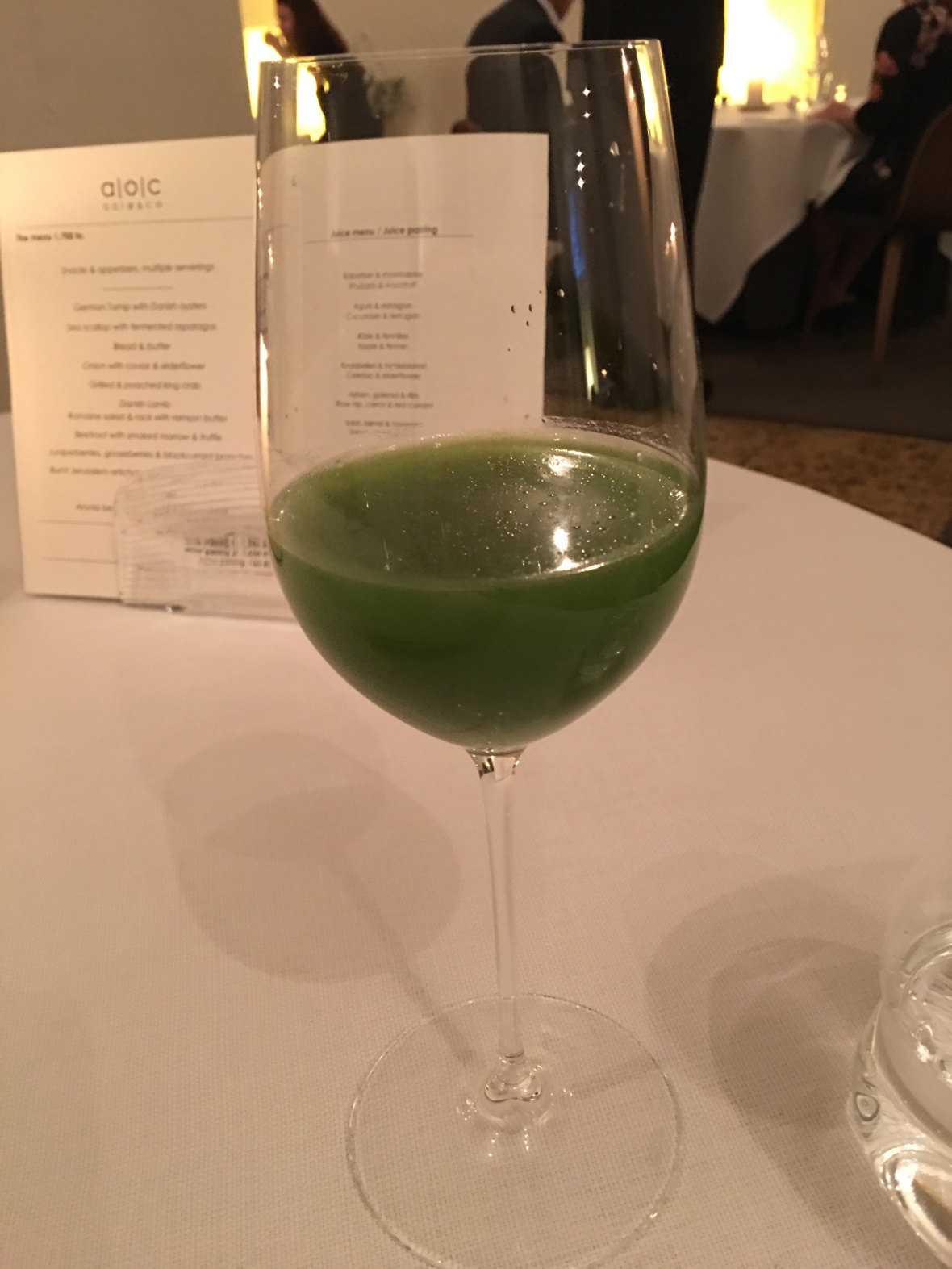 The next course is a German Turnip, or what I know as Kohlrabi, with goodies inside!

Danish Oysters, pickled Kohlrabi and other items are inside.  Blended together – magnificent cold starter.

Next course on its way as well as another juice! Here we have Apple and Fennel.  This was an outstanding juice.  The apple and fennel go so well together, and with the next dish – sweet!

The next dish was Norwegian Scallop with pickled Asparagus, with a Dill and cream emulsion (not sure what else was in there).  At first I thought it was just a scallop.  But only when I started cutting and biting into did I realized that it was thin layers of scallop and asparagus!  So heavenly.

It came with a “Bao”, as they called it, which was a mixture where scallop was also folded in and then fried.  It’s a mantou! 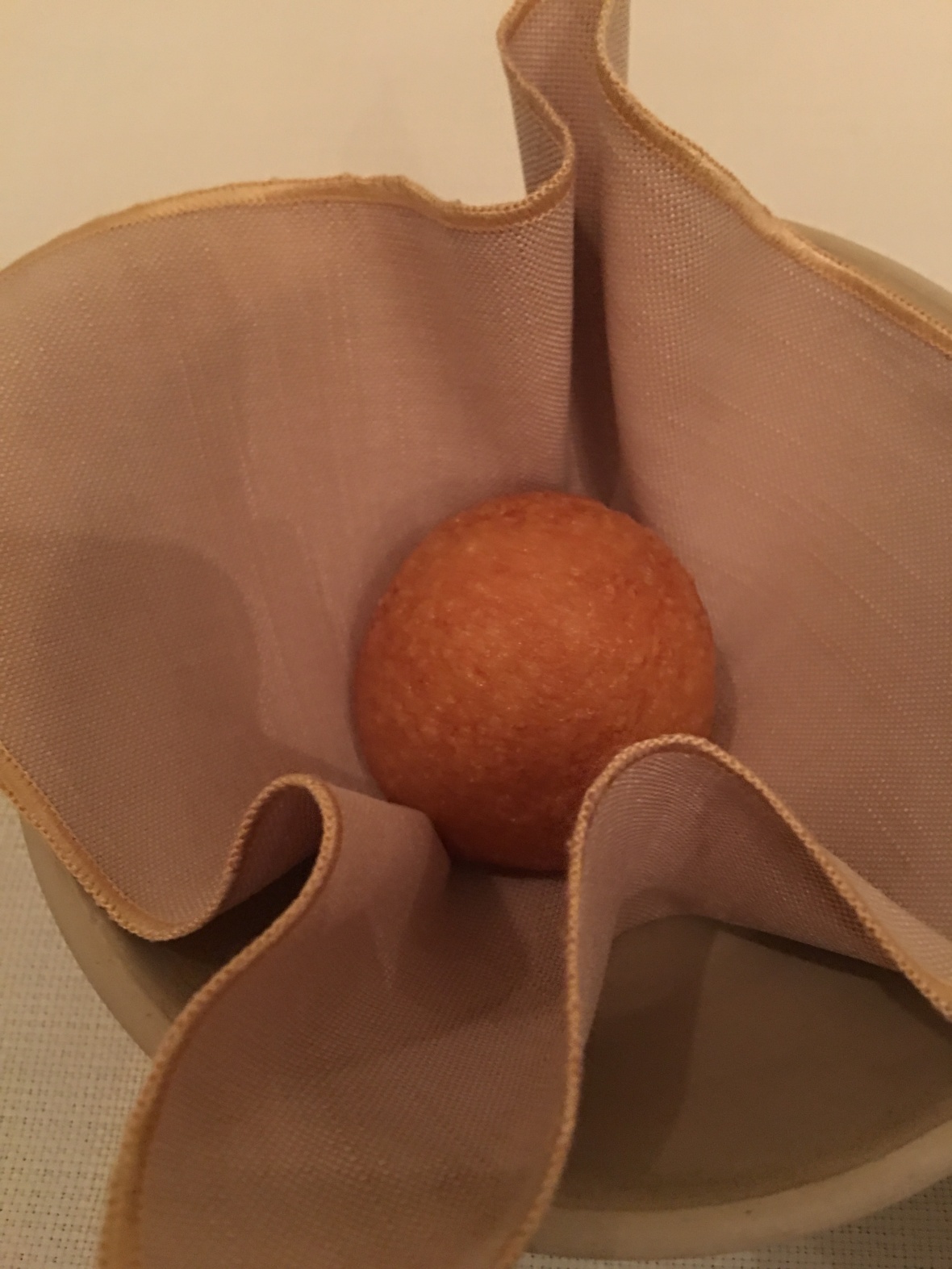 Perfect for sopping up the sauce!

Next up, Celeriac and Elderflower!

Before the next course, we have some bread to bring on the more savory items.  This bread is made from Rye, infused with Dark Porter.  On the side are two types of butter.  On the left is a Nori Butter and on the right is a Salted Butter. I just wanted to eat the butter whole!

The next course was served up tableside by Aleks.  I have to say, the service, attentiveness, knowledge and overall demeanor of all the servers, sommeliers, kitchen staff, etc. was just above and beyond.  It helped to make a great meal an even better experience.  They willing answered questions, stopped for photos, and just delivered.  Quality and overlooked most of the time, but well appreciated.

Here Aleks is cutting up a Baked Onion, one of the specialties at AOC.  The cut it and get the heart of it out for you.

From there, they plate it on a bed of Onion Puree, top it with Russian Caviar to give it a little bit of salt, and then pour a Buerre Blanc made from Elderflower on top.

Wow.  Such a great taste and balance of a dish.  Even for those that don’t like onions, what else can you say? Eat it! 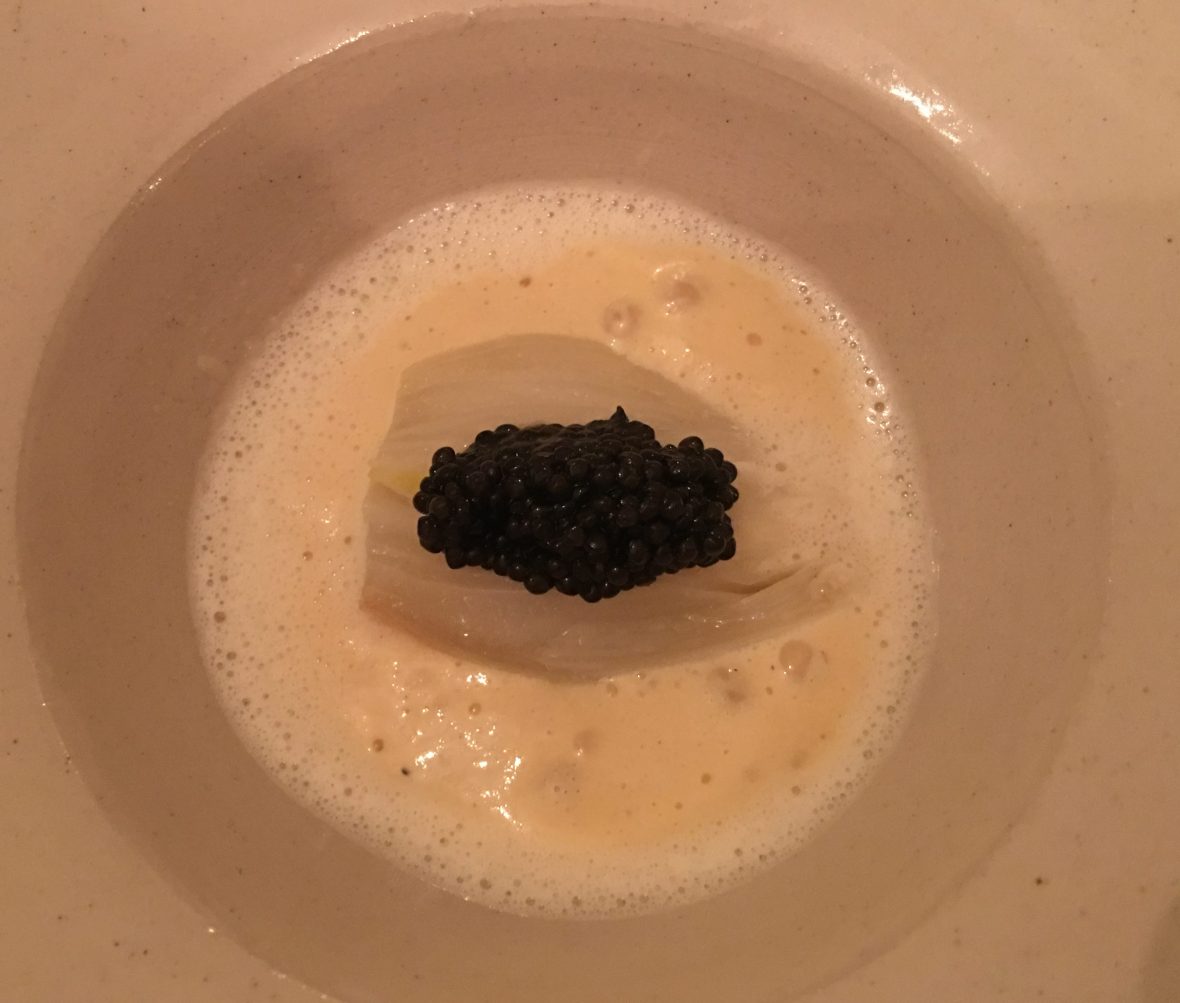 Rose Hip, Carrot and Red Currant was next on the juice list.  Pretty good!

The next dish was started by taking the Red Pine needles and Holly and lighting them on fire.  The fragrance of the burn is supposed to awaken the senses of taste by utilizing the smell.

The King Crab is grilled over the smokiness beforehand and when eaten with the Codfish Roe Cream stimulates your experience.  I have to say, the crab was sweeter and nicer alone.  It didn’t really need the cream at all. 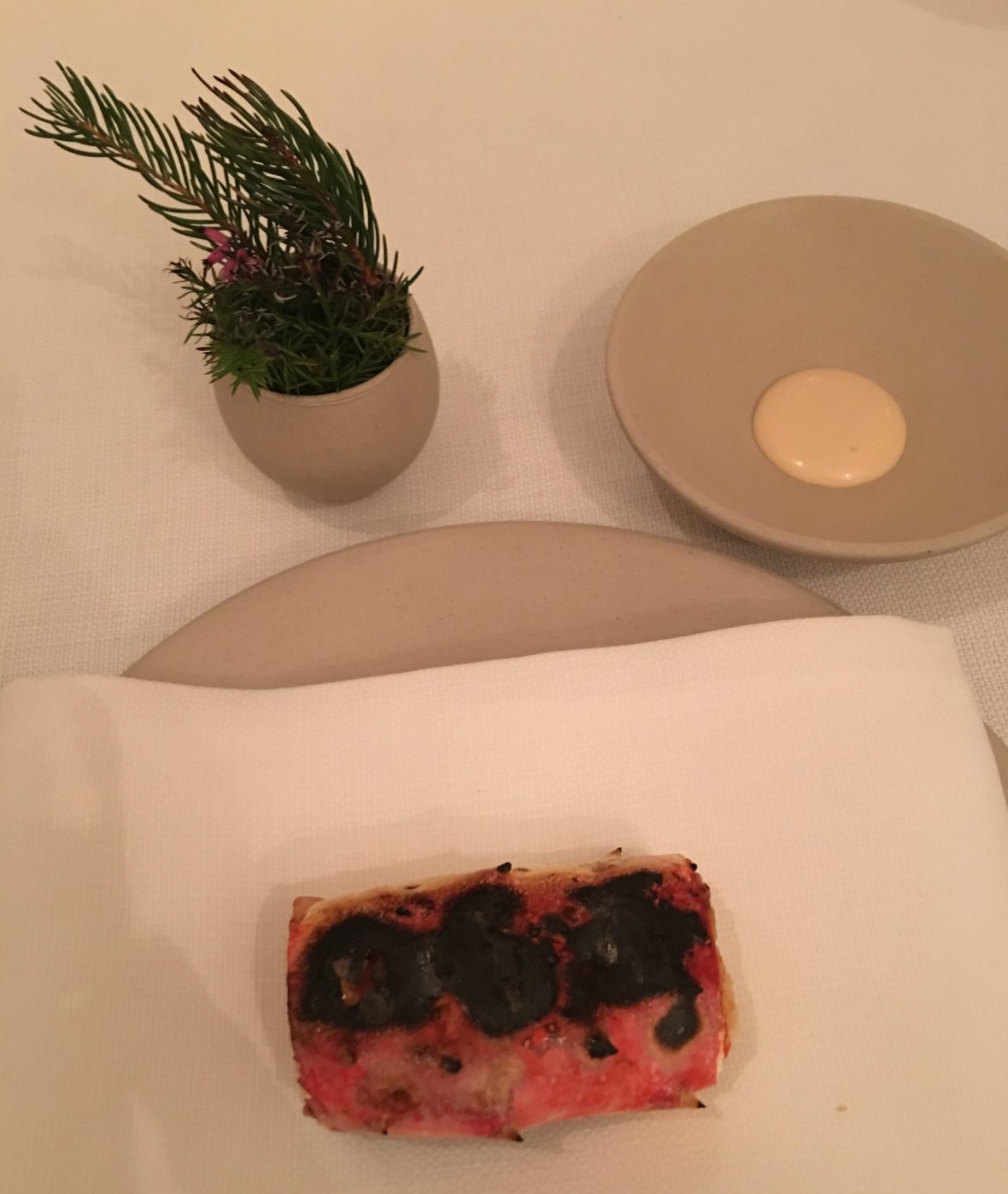 The second half of the crab is the meat from the shoulder of the King Crab, which is then encased in lard and cooked off.  Then it’s set in a broth of Konbu and Potato. Smooth.

For our next juice we have Salad, Chervil and Sorrel.  Not one of my favorites…

This goes with the Grilled Romaine.  It is grilled with a Parsley Oil, some nice flowers.  It is accompanied by a Spinach/Salad Cream and then a dollop of a Lamb’s Tongue Cream.  That is an interesting add to a very veggie dish.  The Romaine was outstanding.  Not sure on the creams though.

After this, Lamb Backstrap which was then coated with a sheet of Ramson Butter.  The Butter melts on the lamb as it absorbs the heat.  The Lamb was perfectly cooked and the tastes melted together nicely. The Lamb also did not have a real gamey taste, as it is taken from young lambs that have not matured yet, thus, they don’t have that gamey taste. 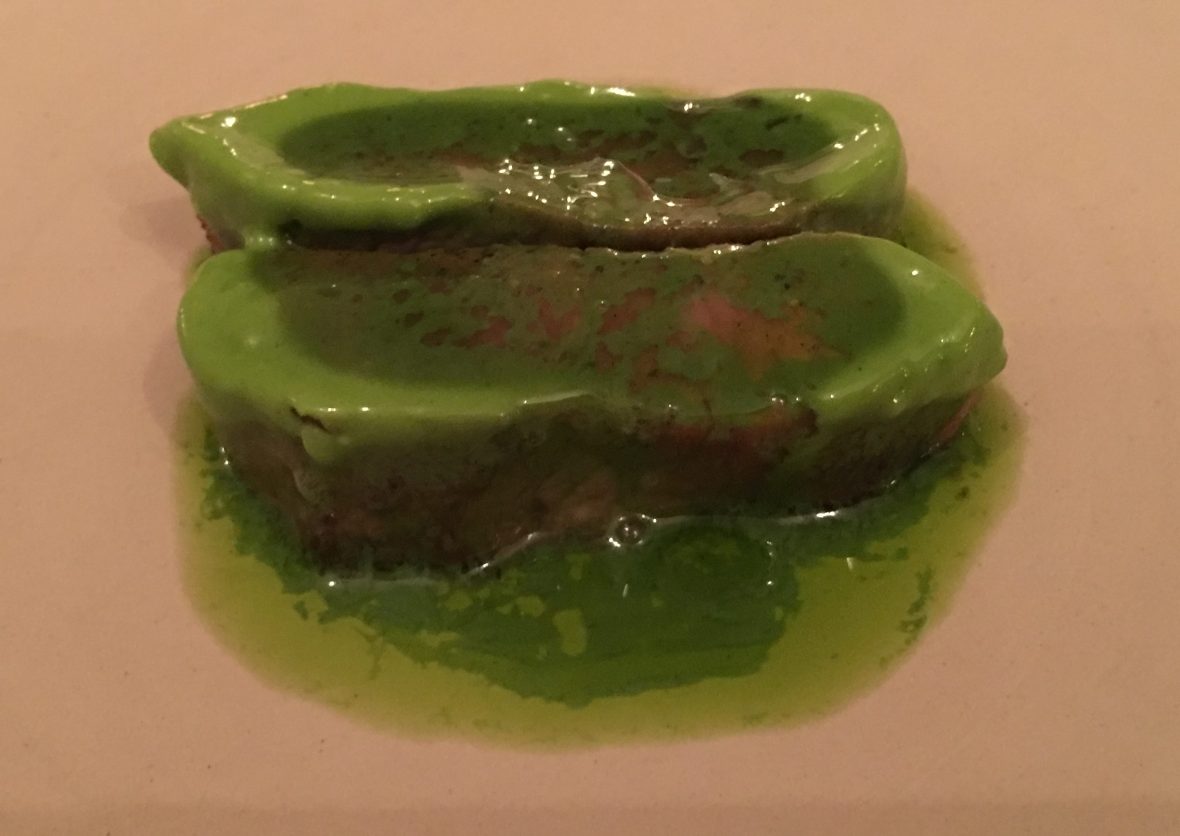 Beetroot and Celery is next!

Here we have a piece of Beetroot, which is covered with Powdered Mushroom and Truffle.  Surrounded by a sauce of Beetroot and Marrow.

Time for dessert!  That comes with a new juice – Gooseberries and Camomile.  Wow, this one was pretty awesome.  A little sparkly, like the aperitif.

Jeppe comes out and prepares the sauce at tableside.  He takes branches of Black Currant flower and grinds them to bring out the fragrance and flavor.  Then adds in fermented gooseberry juice to create a lovely sauce. 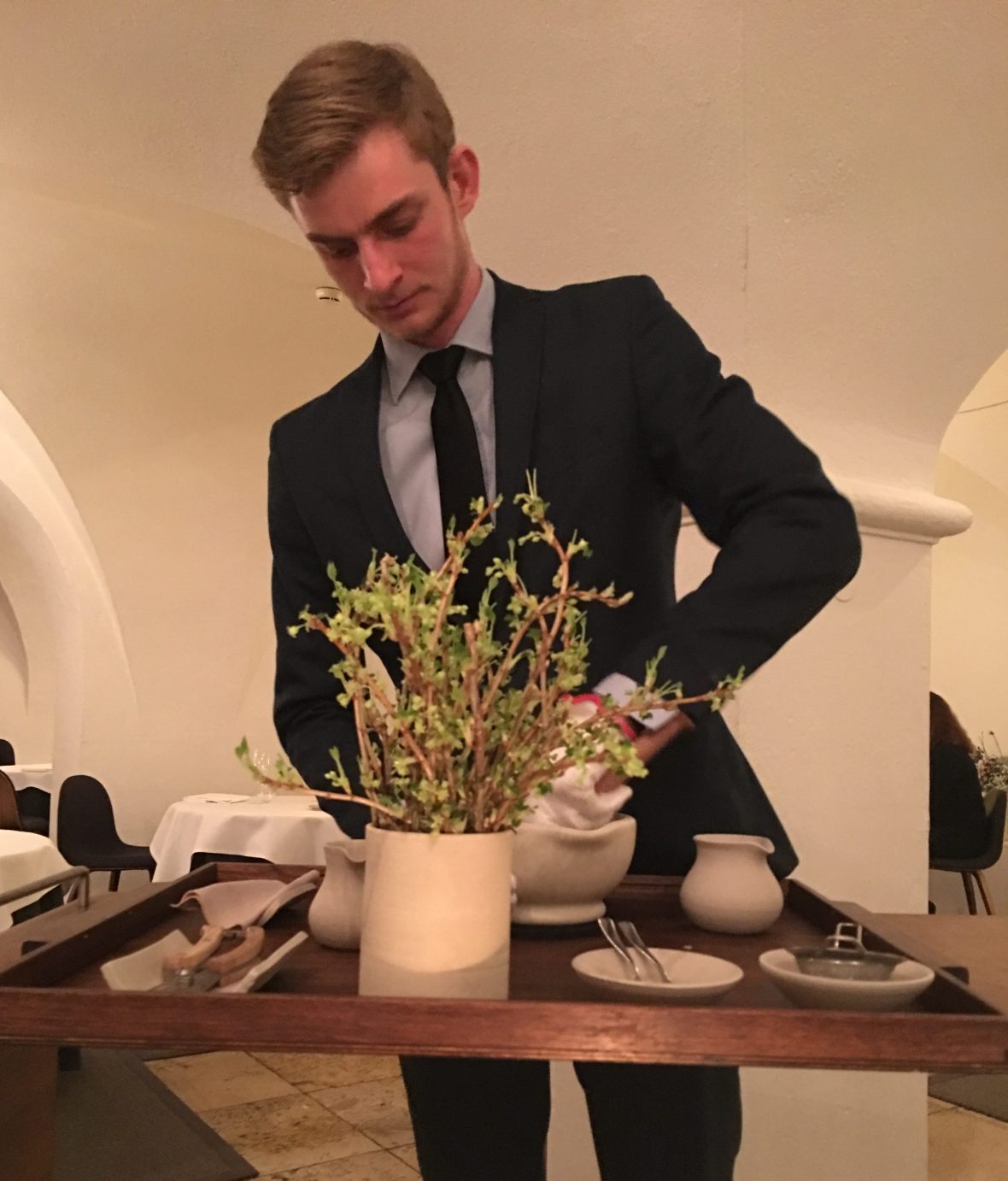 This is poured on top of a Juniper Ice Cream, served in an ice bowl.

The last juice of the night is actually not a juice, it’s a milk.  Hazelnut Praline Milk.  It is just absolutely magnificent.

This comes with a Shell of some light flour which has been torched to created a Brulee effect. 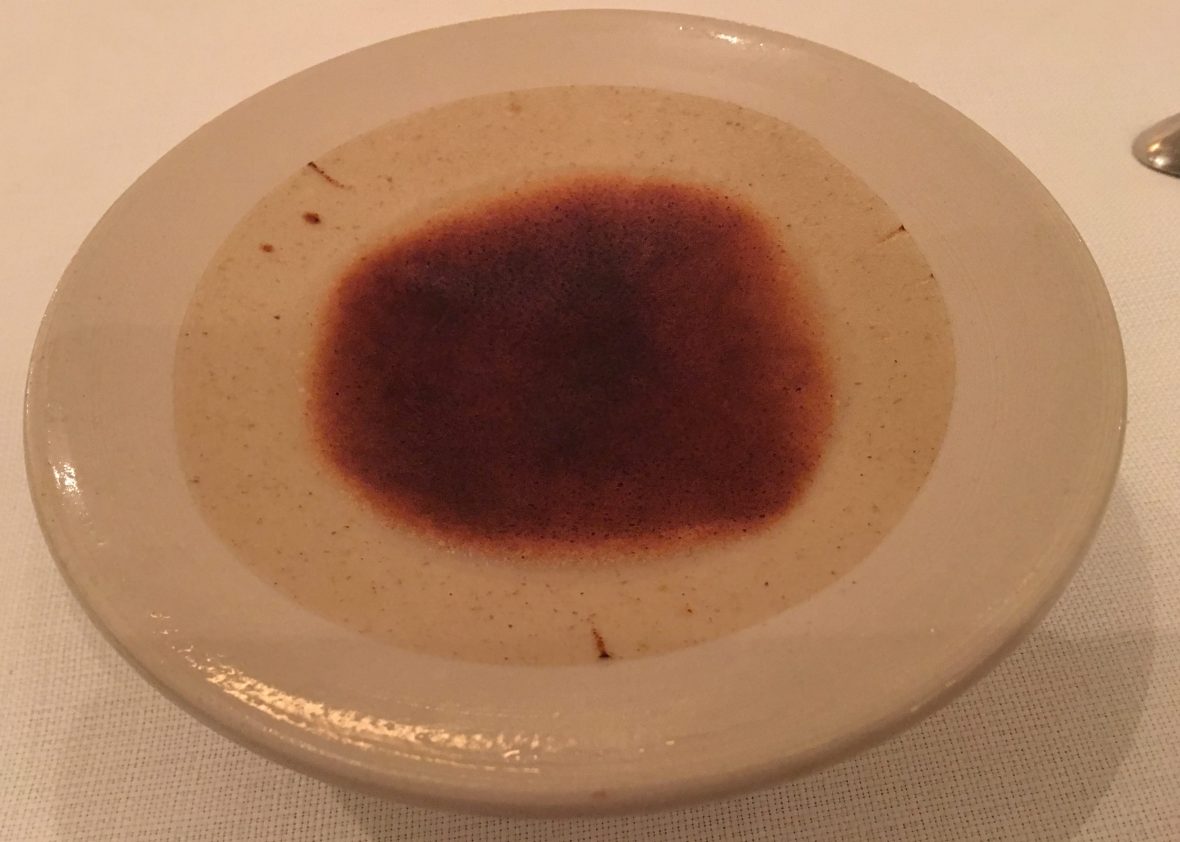 Inside is a mixture of Caramel Ice Cream and Burnt Jerusalem Artichoke.  Oh my.  Heaven, and with the Hazelnut Praline Milk?  Oh joy, oh joy!

With that, I couldn’t believe there was more!  I could have stopped right there, but no, there’s more!

Nordic Vanilla.  This is not actually Vanilla, though it looks like it.  It’s Salsify, which has been dehydrated and cured with Vanilla, Sugar and Malt over a few weeks.  It tastes like a lovely dehyrdated fruit. 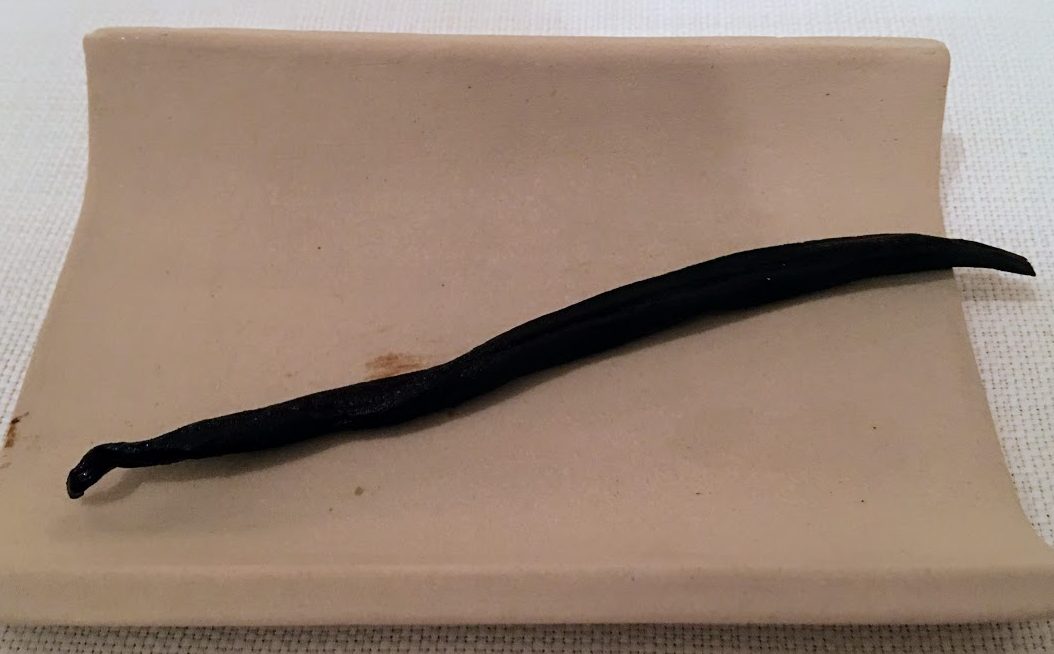 A little Espresso Luongo never hurt anyone.  And they make it good!

That come with a trio of items to finish it all off.

At the top is a Aronia Berry Mousse which is on a twig to eat like a lollipop.  On the right is a Beech Nut Cream on top of Beech Nuts.  Then on the left is a little Brioche with Caramel inside.

A perfect way to end an incredible meal. 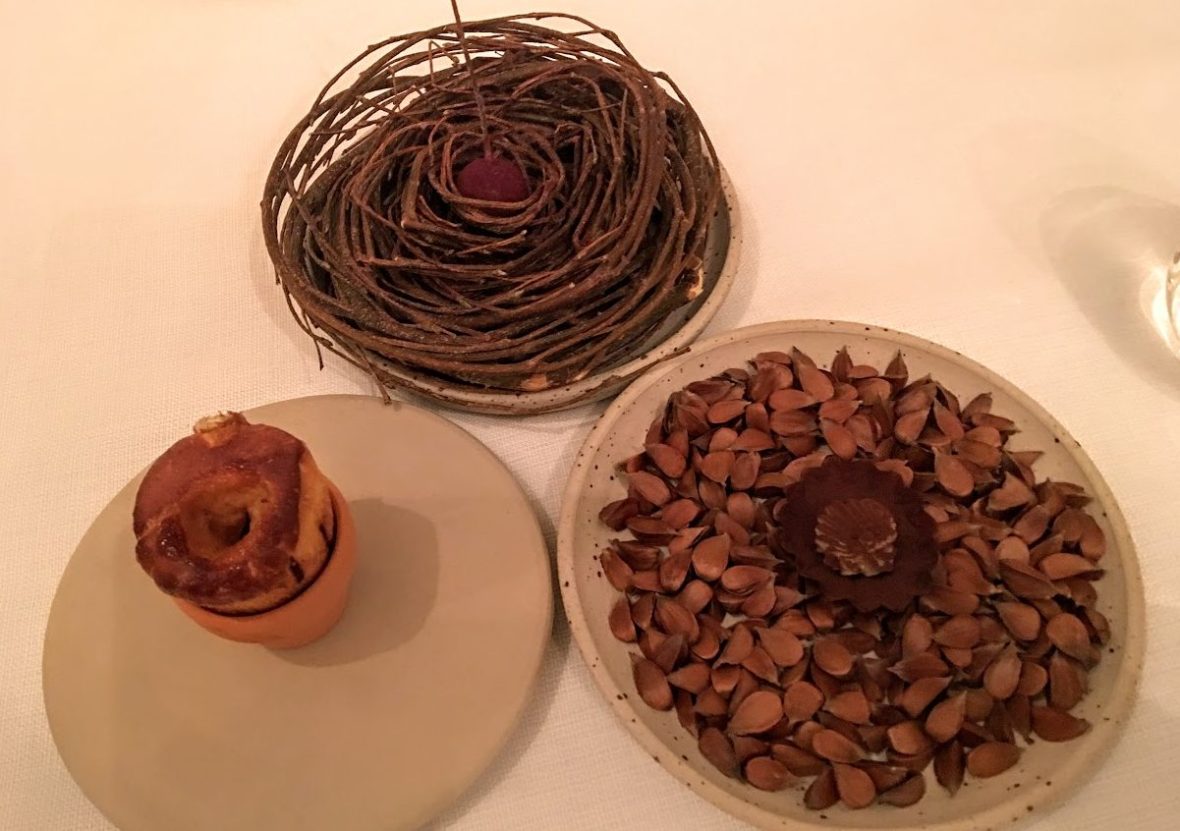 Wow.  What a meal.  It took 3 hours to complete, but the food, service, ambience, everything was just amazing.  It’s not cheap, but then again, when everything is like this, it’s okay to pay it.

Now I know what the Two Michelin Star is.  And it is a wonderful memory that will last a long long time.